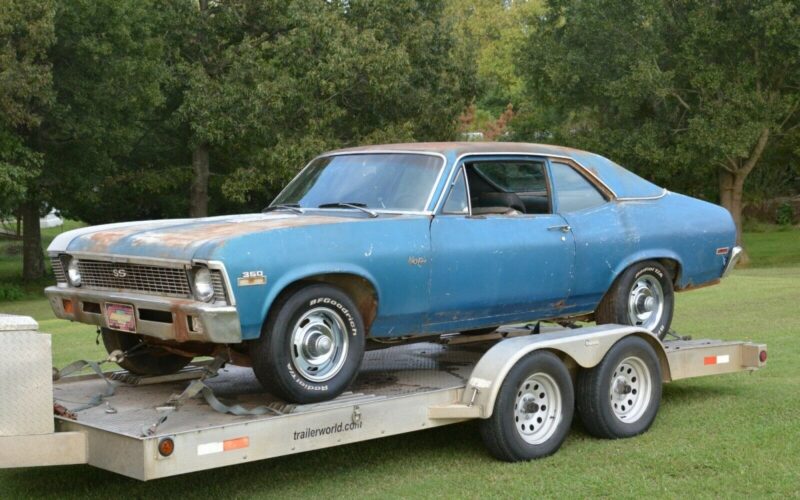 The current owner of this 1972 Chevrolet Nova SS purchased the vehicle in 1981. It isn’t clear when it last saw our roads, but he indicates that it has been sitting for many years. It needs a total restoration, but as he rightly points out, it would make a satisfying family project. The buyer may choose to return the car to its former glory, although it is a genuine blank canvas if they wish to let their imagination run free. Located in Eads, Tennessee, you will find the Nova listed for sale here on eBay. The owner has set the auction to open at $6,500, but no bids have been submitted at the time of writing. For those who aren’t fond of the auction process, he leaves the option open of a BIN at $8,500.

I get the impression that the owner may have intended restoring the Nova, so he did unbolt panels like the front fenders and hood. The project stalled early, so he has sat the panels back in place for buyer transport. When it was new, this would’ve been an eye-catching car. It still wears its original Mulsanne Blue paint, although someone has removed the Black vinyl top. Otherwise, the exterior appears to be complete. The buyer will have their work cut out because the Nova comes with its share of rust. Before we delve too deeply, it is worth noting that it appears to be structurally sound. The frame rails wear nothing beyond surface corrosion, and the doors open and close easily. That suggests that nothing is twisting or moving. The lower rear quarter panels will require work, as will the lower fenders and the corner of the driver’s door. It looks like surface corrosion has developed under the vinyl, but the roof and areas around the windows look okay. Climbing under the car reveals rust in the floors and the trunk pan. It may be possible to patch the floors, but if I were the next owner, I’d bite the bullet and replace the lot to ensure that the car remains rust-free long term. Some of the trim, like the bumpers, will require a trip to the platers, but the glass seems okay. It is worth noting that the Rally wheels that you see in the photos aren’t included in the sale, and the owner will fit a set of alternative wheels and tires so that the buyer can roll it onto a trailer for transport.

The Nova rolled off the production line equipped with a 350ci V8, and while the engine bay still houses a 350, it isn’t numbers-matching. In addition to the small-block, the SS features a Turbo 350 transmission, power steering, and power front disc brakes. This combination offered pretty respectable performance for the era, allowing the Nova to blast through the ¼-mile in 15.9 seconds. The owner admits that this engine hasn’t run in many years, and it isn’t clear whether it turns freely. If it does, coaxing it back to life may not be a complicated process. The buyer will probably pull the motor to whip the engine bay into shape. If that’s the case and that 350 is in good health, it would offer the chance to perform a cosmetic refresh before it is slotted back into place.

The Nova’s interior is equipped with a bench seat upholstered in Blue cloth. It would’ve been an inviting place when the car was at its best, but that was such a long time ago. The owner is candid about the interior requiring a total restoration, and he raises the possibility of a trim kit as the best option. If the buyer is planning a faithful restoration, it makes perfect sense. They also may be planning to follow a different path, so a trim kit may not be appropriate. If the faithful approach is the buyer’s plan, a trim kit that includes all of the upholstery, headliner, and carpet set will cost around $1,200. A dash pad will add a further $300 to that total, and there are sure to be some minor parts that will be beyond salvation. This path isn’t cheap, but it will return the interior to a factory-fresh state.

There’s no doubt that the buyer will face some work if this 1972 Nova SS is to once again shine like a new penny. The process will be a tough one, but I’ve seen cars in worse shape brought back from the brink by dedicated owners. It would make a wonderful family project and one that offers an enjoyable classic motoring experience once the tools are laid down for the last time. There have been no bids, but ninety people are watching the listing. Do you think one of them will make their move soon, or are you tempted to beat them to the punch?Did you enjoy this find? Show your support by becoming a member!