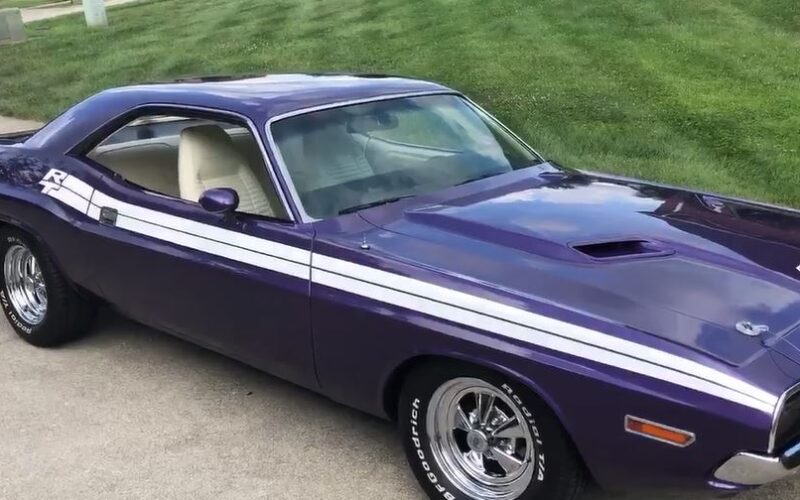 Engines with voluminous displacements epitomized the muscle-car era, and this 1970 Dodge Challenger takes the idea to the extreme via its 496-cu.in. V-8 swap. The seller states that when he purchased the E-body in May of 2014, its colors had already been changed to Plum Crazy outside and white inside, and its 318-cu.in. small-block had been replaced with a 360. He then sourced a 440-cu.in. big-block, had it bored, stroked, and built into a 496 at Wagamon Brothers in Minneapolis, and has since used his Dodge “exclusively for car shows.” This Challenger’s mammoth engine and a highly desirable color, paired with its agile shape and upscale pony car persona, are among its most compelling attributes.

Additional modifications include an aluminum radiator, an owner-sourced 727 TorqueFlite three-speed automatic, and an Eaton Detroit Trutrac differential with Motive Gear 3.73s. The seller states, “The car is very fast and smooth, and 575 lb-ft of torque sets you back in the seat.” He also relates that there is a “small oil drip, not exactly sure from where,” and that the transmission “shifts excellently.” The seller has also included a dyno readout that shows peak power at about 495 horsepower at 5,100 rpm and 575 lb-ft of torque at 4,000 rpm. The invoice provided by the seller details $28,350 in parts and labor related to the engine build.

This Challenger’s Plum Crazy paint was reportedly applied in the mid-1990s. The original color was light green according to the fender tag. The seller says the paint is “good,” but “bubbling in front of the rear wheels.” He adds that the glass “appears to be original” and the “seals look good.” He notes “no evidence of leaking,” and that “all of the lights are in working condition.” The exterior bright trim and bumpers also rate as “good” and “very nice,” respectively, by the seller.

Factory-installed green upholstery has been changed to white vinyl, which is said to be “very clean.” There’s also a “new Rallye dash built by Instrument Specialties,” as well as an aftermarket Pioneer stereo and speakers. According to the seller, the speedometer and tach are not connected, and the heater does not function. The seller adds that the clock, turn signals, and fuel gauge are functional. He rates the dash pad, carpet, console, and door panels as “very good.” Interior modifications include an aftermarket steering wheel, tachometer, oil pressure gauge, and a pistol grip-style shifter handle.

The seller describes the Cragar wheels as “not perfect, but very good” and the BFGoodrich Radial T/A tires, sized 215/70R15 in front and 255/60R15 in back, as “almost new.” The suspension, consisting of torsion bars in front and leaf springs in the rear, was “lubed and checked-over three years ago.” The steering linkage remains “tight” for the power-assisted system, and the “rear shocks hold air.” Power-assisted front disc brakes were swap

The seller states that this vehicle will be sold on a clean Kentucky title in his name. Additional paperwork includes the powertrain invoice from Wagamon Vrothers, the dyno sheet, and an appraisal note from 2015 when the car was built. This 1970 Dodge Challenger’s revered High-Impact color and the growl and grunt its 496 generates certainly aren’t subtle, so this E-body promises to draw plenty of attention wherever it goes.