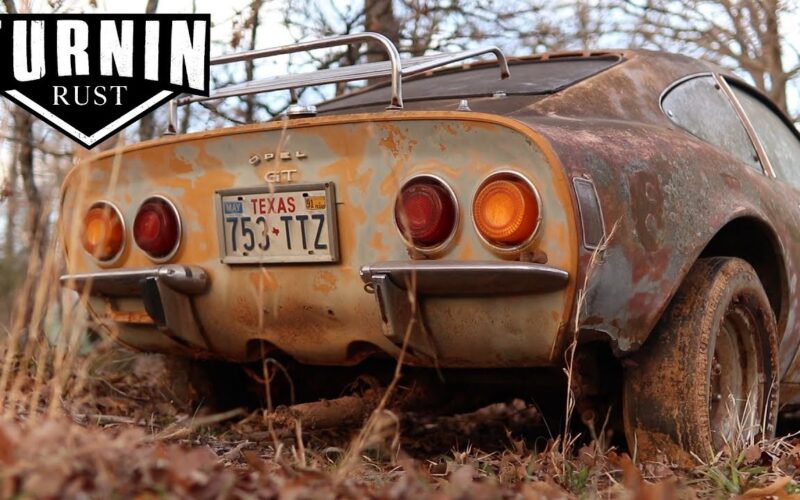 Most people would give up on a car like this.

Turnin Rust’s boys have tackled a wide range of interesting and challenging projects, but restoring a 1972 Opel GT that has been sitting for 30 years makes for great entertainment.Everyone has been there:If you spend a lot of money on a car that isn’t running, you might end up spending more than you should have.This German looks like a rats’ nest under the hood, so turning the engine on seems almost impossible.

Thankfully no rattle snakes or aggressive spiders had hitched a ride in the engine compartment. With the starter finally exposed, they hook up a hot battery and try turning the engine over. It’s the moment of truth, and there’s noise that sounds like the crank turning.

After digging out further, the guys can see the crank is turning but the belt isn’t moving. Getting an old, non-functioning car running again is kind of like being a detective where you have to put the clues together. They try pulling the plugs, and that helps but they have to add extra lubricant and install some new wiring in the quest to drive the car off the trailer.

It takes a lot of time, but finally they get all the cylinders firing, kicking out a plume of smoke from the tailpipe, and then the engine stalls. Finally, after several more tries they get the car running surprisingly strong and are able to drive it off the trailer.

Most people would’ve given up and rolled the car off by hand, then stuck it under a tree or in a garage to work on it later. That’s unfortunately how these classics end up just sitting, because procrastination doesn’t get things done. Instead, the Turnin Rust team has a determined attitude. Nobody is yelling at anyone else, there’s zero drama, and instead it’s just two guys working together to solve a perplexing problem.