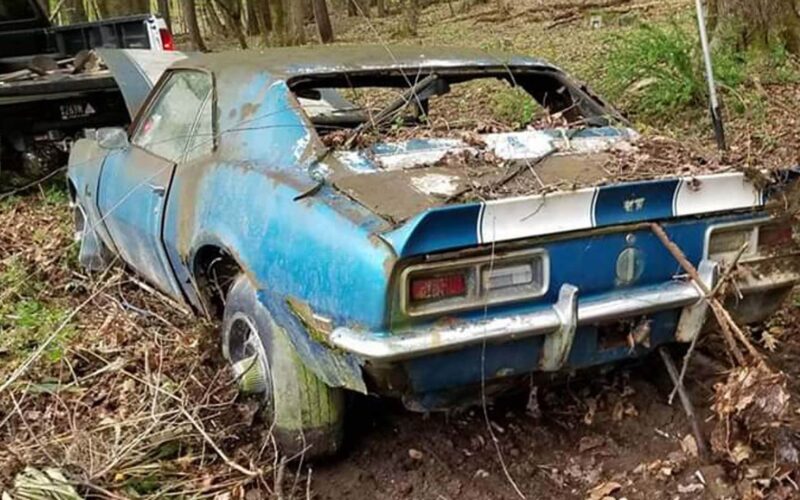 Every now and again we come across a barn or field find that’s extra special—one that has been carefully tucked away from time and is still in pristine condition. This isn’t that story, but what this car lacks in condition it more than makes up for in rarity and coolness. Meet a 1968 Z/28 Camaro that is currently being saved from the ravages of time. But how did this rare piece of Camaro history come to find itself abandoned in a damp field to be violated by Mother Nature for over four decades? Well, for that story we need to hit up the car’s current owner, JB Coppedge. As he told us, “The first owner didn’t have the car long and, in late 1969, ended up trading it in for a 1969 Nova four-speed car. I’m not sure when the second owner bought the car, but when he got it, it had a warranty-replacement CE9B 302 engine under the hood. While he owned it the heads were replaced with a set 492 angle-plug heads, and he added a Hurst shifter along with a Sun tach. (When I restore the Camaro I’ll be keeping everything done on it as a day-two car.) From my understanding, the car ran around the town he lived in until 1975. The car was parked that year on the side of the mountain where this gentleman lived, and later that year it was hit by a mudslide. From what I was told, it was out of sight, out of mind. So, he just let it sit for 43 years!” In May of 2018, Dave MacConnell found the car listed on Craigslist. As soon as he saw it, he ran over to look at it and give a deposit. At first, MacConnell believed it was a one-owner car. On May 6, 2018, MacConnell got help from John Fardone, a well-known hot rod hunter (who just had a 1970 LS6 Chevelle in HOT ROD Magazine), to help dig out the car. On February 15, 2019, Jerry Macneish, owner of Camaro High Performance LLC, made it to Pennsylvania and verified the car as a real 1968 Z/28. Coppedge continued, “One of my first cars was a LeMans Blue 1968 Camaro SS and I had always regretted selling it. I always loved the idea of owning a real Z/28, but with the prices of cars today, I didn’t think I would ever get one. I was looking for the perfect project car high and low, looking all over different states on craigslist and Facebook marketplace, I saw this beautiful 1968 Z/28 UU paint code Lemans Blue Camaro listed in Pennsylvania and just fell in love with it. I showed it to my father, Brad Coppedge, and after a few days talking about it, we decided to load up and go get it.

“MacConnell owns a small, cool little car lot called MacConnell’s Service Center. On August 19th, 2019, right before midnight, I was pulling into the parking lot of MacConnell’s Service Center. I went wide to pull into his lot and a small car without lights on tried to get around me and hit my truck and trailer as I pulled in. I took off a lot of the front end and some lights on the car that hit me, but only broke off some plastic on my running board. After dealing with that, I met with MacConnell. I took a quick peek at the car, paid him, and got all the paperwork. At 9 a.m. the next morning, I was back at MacConnell’s lot to load up the car and I got to meet Fardone. Not only did we buy a very rare car, we made friends with two of the best guys you could ever meet. We’re still in contact today, and I hope to go back to hang out with them soon. “Two days later, we got the Z/28 back to Claremore, Oklahoma, where we’ve lived since 1979. I then started on the paperwork trail. I ordered the NCRS document where I was able to get the shipping date and what dealership sold the car. After spending time on the phone with that dealership, I couldn’t get any farther. I ended up posting on a Pennsylvania first-gen Camaro page about the story, and a gentleman named Jeff Boone saw the post and let me know he’s in the same town as the original A.W. Troutman dealership, and knew some people who work there. He spent an afternoon looking and was able to find the dealership invoice! Then he looked up the person who bought the car and was able to get two pictures of the beautiful 1968 Z/28 when it was new from the first owner,” Coppedge recalled.

“In the last 2 years, I’ve been buying original parts for the car to do a complete restoration on it. NOS quarters, tail, grille, fenders, and so on. I am trying very hard to keep as much of it as I can with real GM parts. I even found an NOS T.I. distributor with all the components and a like-new GM cross-ram, verified by Wayne Guinn with Guinn Engineering, dated one month before the car was built. I got the cross-ram from Tom Cudeyro. Cudeyro has dealt with many cross-rams over the years, and he’s spent a lot of time helping me out. I’ll be doing most of the work myself with the help of my father. He has been working on ’56 Chevys as long as I can remember, and he’s the reason I wanted the cross-ram for this car. If it wasn’t for him, my dream car would not be here. I’ll also be letting my young son, Joshua Davis, help me with the restoration. Joshua loves the newer modern muscle cars, but he has taken a big liking to this 1968 Z/28 and he loves to talk about it and always wants to help with the project.” As for the 1968 Z/28 Camaro, its trim tag date is 07C, which would be the third week of July in 1968. Production of ’68s stopped in the fifth week, so this is one of the last ’68s made. The Camaro was shipped to A.W. Troutman in Pennsylvania on July 16, 1968, and sold on July 27. The Z/28 had all the standard options, like a 302 small-block, Muncie four-speed, front disc brakes, white stripes, and a rear spoiler. Other than that, it was low-option, with no center console, no tach, and no gauge pack. Oddly, it’s one of only 697 examples that had factory power steering. The trunk still held the original jack as well as a date-correct spare. The car looks pretty rough in the pictures but Coppedge told us that it’s actually pretty solid, and the framerails are in great shape.

We just love that this rare piece of Chevrolet and Camaro history was saved from rotting away in the woods and will be properly restored to its former glory. When it’s done, we’ll be here to shoot a full feature on it. –Photos By JB Coppedge