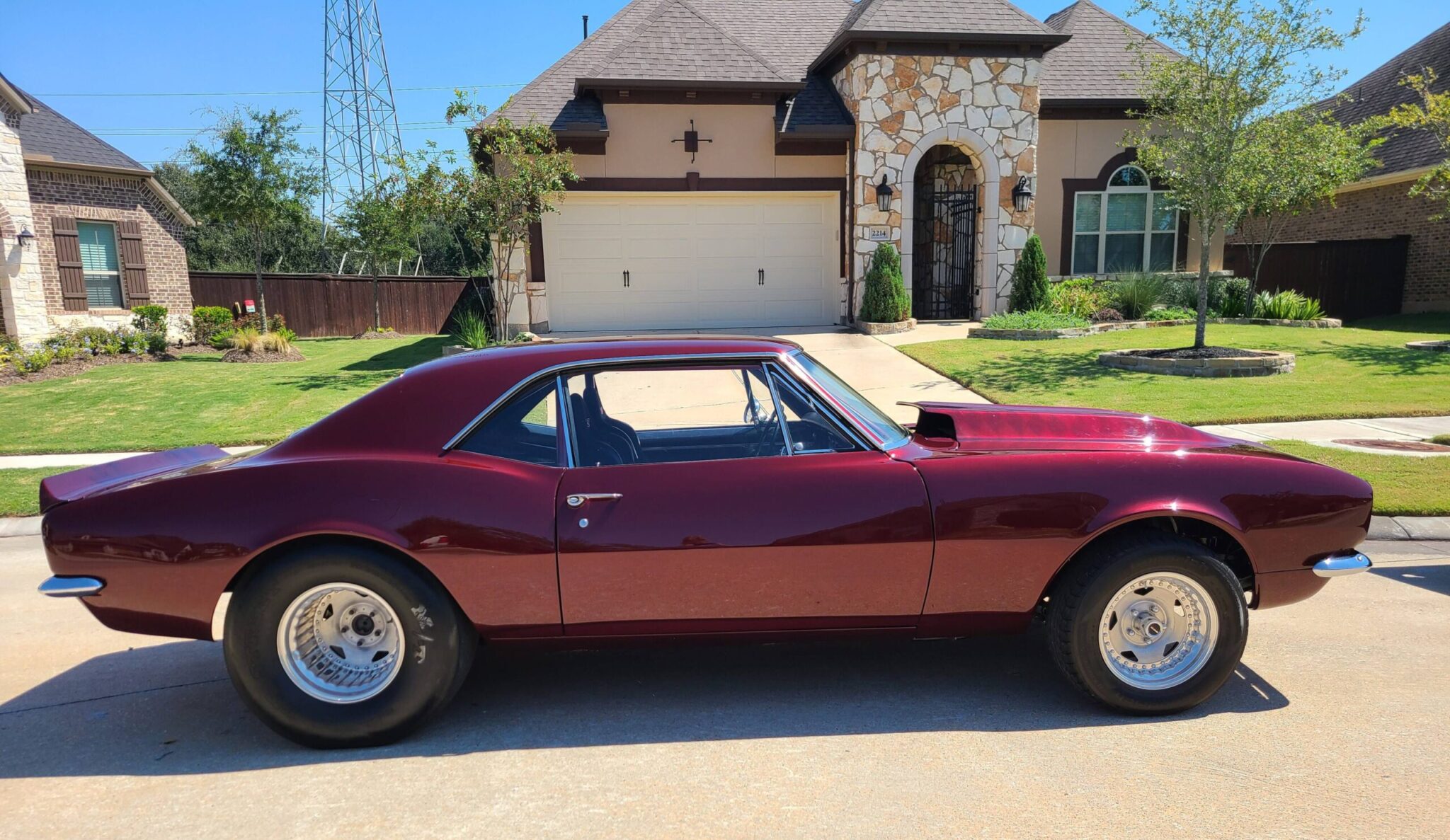 Pro-Street cars typically aren’t subtle. In fact, they are purposely built to be just the opposite. However, the seller of this 1967 Chevrolet Camaro decided to forgo a few typical Pro-Street features during its build, like the engine poking through the hood, wild multicolored graphics, and wheelie bars.

She and her husband instead, “made it really clean and respectful” with a monochromatic paint scheme and ghost checkered-flag stripes. But don’t worry, 489-cubic-inches of aluminum-headed, pro-built, big-block, grunt is nestled under a 4-inch cowl hood to justify the undercarriage mods and wall-to-wall rear rubber.

The seller recalls, “We bought the shell with the chassis work already finished from Camaro Concepts in Houston 20 years ago and started on the build. I chose every part on the car,” she continues. “It hasn’t been raced, it’s never seen rain, and it’s garage kept.” Her husband adds that among its many attributes, this ’67 is also a factory Rally Sport.

Outlaw Racing Engines in Waco, Texas, built the 4-bolt main 454 stroker engine to net 489-cubic-inches, according to the seller. The block was over-bored and the bottom end’s balanced rotating assembly features an Eagle 4.25-inch stroke crankshaft, I-beam connecting rods, and forged-aluminum pistons. A hydraulic roller camshaft was employed, Pro Topline 320 aluminum cylinder heads were specified, and the compression ratio is 10.5:1.“Edelbrock’s 800-cfm carburetor keeps the engine detuned for the street,” per the seller. An aluminum Weiand Team G single-plane intake manifold is under it. The fuel system is comprised of an 18-gallon fuel cell in the trunk, an Aeromotive fuel pump, filter, and regulator, and new 1/2-inch stainless fuel lines and a 5/8-inch return line. The ignition system is from MSD, and the custom Lemons headers feed into a 3-inch diameter exhaust system with an X-pipe and Flowmaster 50-series mufflers.

A 3,800 RPM stall-speed torque converter was chosen, and the Pro Bandit-shifted Turbo Hydra-Matic 400 three-speed automatic was built by Outlaw Racing Chassis of Houston “to withstand 1000+ horsepower,” the seller says. A custom-fabricated driveshaft sends torque rearward to a narrowed Ford 9-inch rear axle with 3.90:1 gears and Strange axles. The seller states that “there are no leaks” from the engine, transmission, or rear end.

The body was painted in “50th Anniversary Corvette Red pearl coat 10 years ago by Von Otto in Waco,” the seller reports, “and overall, it’s still great. There are no swirls or blemishes in the finish, and no rust.” Otto also added the airbrushed ghost checkered-flag stripes on the hood and decklid (and painted the engine). Additional new parts include the headlight and taillight assemblies, door handles, bumpers, side markers, weatherstripping, fenders, hood, grille, windshield, and backlite. The side glass isn’t scratched, and the lighting works.