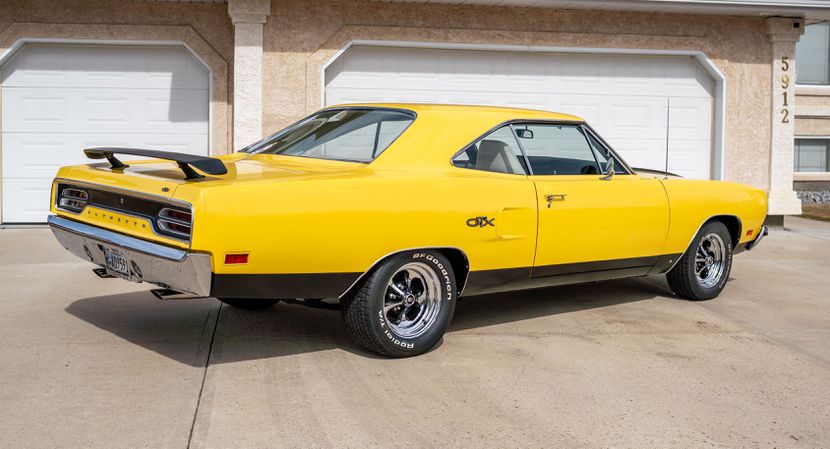 With a just-right stance augmented by period-perfect Keystone Klassic wheels, this 1970 Plymouth GTX hardtop restomod evokes memories of the Seventies-era cruising scene, where such “Day Two” enhancements were part of the muscle-car Zeitgeist. This example is also powered by a 496 stroker big-block that is cleverly disguised as a stock-appearing 440+6, with complementing equipment, including a Hemi four-speed and Dana rear axle. “No expense was spared on the restoration,” notes the seller — and it shows, apparently, in the details expressed in the accompanying photos. The car appears to be very clean, and the seller notes it has only about 1,200 miles on the completed build. “Everything is new, NOS, or refurbished,” he adds. The car is also said to be an original Track Pack car, and retains its original fender tag and two build sheets. According to the “U” in the VIN, this GTX was originally equipped with a 440/four-barrel engine. In its place is a “built” 496-cu.in. stroker V-8 engine topped with Mopar’s famous six-barrel induction system. According to the seller, the engine made nearly 630 lb-ft of torque to the crankshaft, and all of it is channeled to the Tarmac via the reportedly original (and rebuilt) 18-spline Hemi four-speed and a 3.54-geared and Sure Grip-equipped Dana 60 rear axle. The seller reports the engine starts and runs well, with no smoke and no leaks. The pistol grip-equipped four-speed manual transmission is also said to shift smoothly. It’s reportedly matched with a McLeod 11-inch twin-disc clutch. This GTX’s exterior has been restored to its original appearance, including a respray of its “FY1” Lemon Twist Yellow color. There are no reported blemishes, swirl marks, or rust, and the seller notes, “It was painted 10 years ago, but looks like it was painted yesterday.” The restoration included replacement of the glass and seals, which are said to remain in “excellent” condition. The exterior trim and chrome also appears to be in great shape, per the provided photos, and the car retains its original and optional front bumper guards and wheel lip moldings. And per the “V68” code on the fender tag, this car was ordered without the signature side stripes. Inside, this GTX’s white vinyl interior has also reportedly been restored. And apart from a pair of auxiliary instruments mounted under the dashboard and a modern audio system tucked away discreetly in the glovebox, the cabin appears to be in stock condition. The seller says the seat covers and carpet are in “like-new” condition, as are the steering wheel, headliner, and other interior trim. The heater is said to be functional, along with the gauges. Per the photos, there is virtually no visible wear in the restored cabin. The suspension and brake systems reportedly have been maintained in stock condition, with no reported issues or needs, while the chassis has been reinforced with a set of subframe connectors. The car has the heavy-duty Hemi suspension package, and, according to the seller, all of its components were refurbished or replaced during the restoration, with equipment including power steering and power front disc brakes. Braking performance is said to be strong and the car reportedly “drives straight and smooth,” rolling on BFGoodrich Radial T/A tires mounted on those period-perfect Keystone Klassic wheels. The seller describes the wheels and tires as being in “new” condition. The seller states that this vehicle will be sold on the proper Alberta, Canada, document in his name for transfer of ownership. Additional documentation includes receipts for the restoration work and parts, two build sheets, and the fender tag. This 1970 Plymouth GTX hardtop is a very clean and apparently well-detailed example of Plymouth’s most luxurious muscle car — and this restomod vision takes it to the next level, with its higher-performance stroker engine and a classic Seventies street-machine appearance.