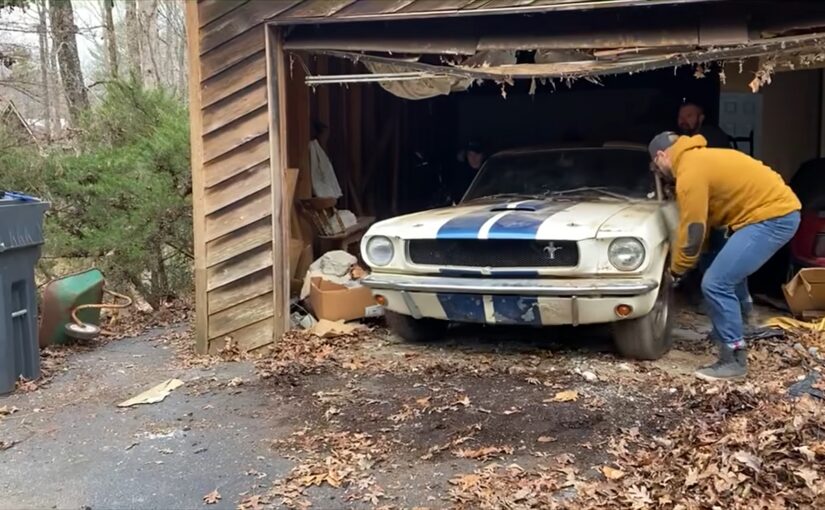 With only 562 units built, the 1965 Shelby GT350 is one of the rarest Mustangs out there. Amazingly enough, one of them was recently discovered in an abandoned house, making it one of the greatest barn-found classics of 2021.

There’s no info as to how this GT350 ended up spending decades in this garage. Likewise, there’s no word as to when and why this house was abandoned with such a valuable car inside. What we do know, according to YouTube’s “American Mustangs,” is that this GT350 is as authentic as they get. Numbers-matching V8 engine and all.

Dragged out of its resting place for the first time in decades, the Shelby appears to be in decent condition. The paint has peeled off and there’s surface rust on most body panels, but the car is in one piece and appears to be complete.

It has all the right Shelby tags, it still rides on its original wheels, and the interior is in better shape than the exterior. Of course, the V8 engine no longer runs and it’s safe to assume that it’s stuck, but that’s not surprising given its long stint off the road.

The video that documents the rescue was released in January 2022, but the car was actually discovered in 2021. It took the new owner about two months to strike a deal for the GT350 and the description mentions that “since this video the car is now running and driving.” That’s awesome news! One more 1965 GT350 was saved and put back on the road. And it’s safe to say that it will get a proper restoration too.