Soldier Pulls Over During Rain Storm To Salute Fallen Veteran

While driving on a road in Killeen, Texas, a Fort Hood soldier noticed a funeral procession on the opposite side of the highway.

As he was passing by, the soldier, Kenneth Varnes  noticed a line of patrol cars and vehicles with American flags on them. As a soldier himself, he realized the funeral was for a fallen veteran and decided to pull off to the side of the road and get out of the car.

In the midst of a thunderstorm and pouring rain, Varnes stood beside his vehicle and saluted the fallen veteran until the final patrol car passed by.

Zachary Rummings, a resident nearby noticed Varnes standing outside in the storm and took a picture of Varnes saluting the fallen veteran. 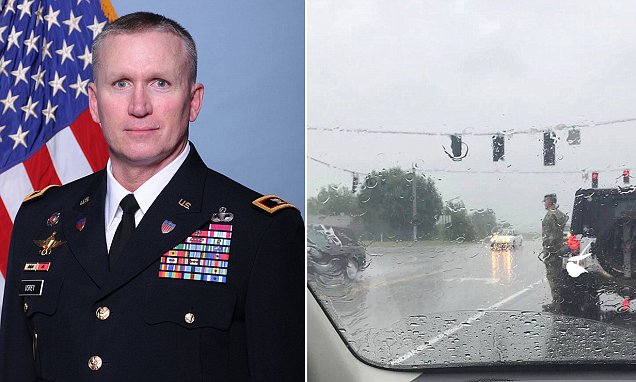 Rummings then shared the photo on social media and asked if anyone knew who the man was.

“In a funeral procession for a retired soldier and he stood in the rain the entire time and saluted,” Rummings wrote. “Hats off and respect to that young man. Thank you.”

Even though Varnes has received praise for his patriotic act, Varnes said that it was only natural for him to salute the veteran.