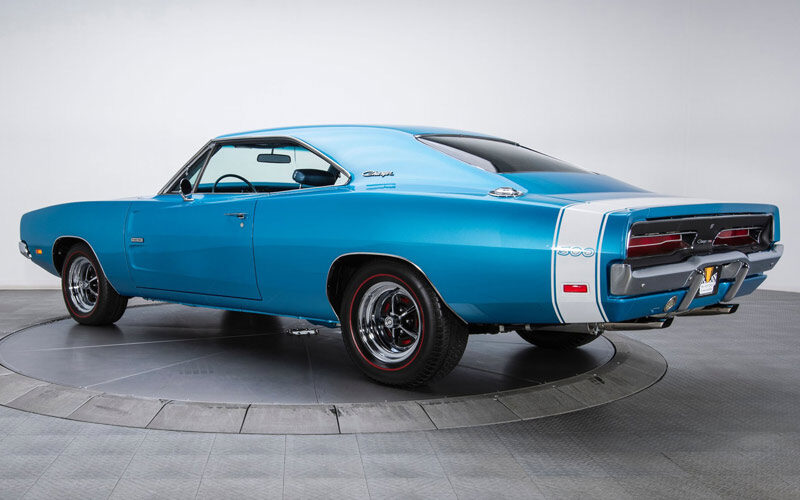 Tired of eating Ford and Mercury’s dust, Chrysler was chomping at the bit to wrack up some wins in NASCAR Grand National Cup competition. Their best ride, the 1968 Dodge Charger R/T had some fatal flaws which kept them off the awards platform that year. Determined to turn things around, Chrysler came to play with a new Charger in 1969, the Dodge Hemi Charger 500.

Dodge engineers found that the rear window of the ’68 R/T caused lift and the wide mouthed front valance incurred drag. The correction for their NASCAR problems was the 1969 Dodge Charger 500. Engineers made the rear window pug flush with the rest of the roof giving it a slippery effect in wind tunnel tests. They put a Coronet grille in front with exposed headlights. It makes the Charger 500 look slightlly different from the R/T, and today don’t think that fact has eluded Mopar muscle car collectors. They treasure the Charger 500’s.

This week, an extremely rare and desirable 1969 Dodge Hemi Charger 500 has been listed for sale by RK Motors Charlotte. It may be found in the Mopar Muscle Car Section on the Cars-On-Line.com website. (Click here to read the ad copy and see dozens of detailed photos.) They describe it as “ultra rare and historically significant.” As all important muscle cars do, this one has an interesting story.

According to well-known MoPar expert Galen Govier, who fully documented and verified this particular Charger 500, there were precisely 559 Charger 500s built in 1969. Some historians estimate that about 390 of those were purchased to be used for street use. Only 116 were, like this car, fitted with a legendary Hemi V8. And of those 116, only 32 came with a 4-speed manual transmission. But we know the history on this one and it is very interesting.

The first owner of this Hemi Charger 500 was David Roark, a Navy pilot fresh off a couple tours flying combat missions over Vietnam, and, at the time, settling in the Jacksonville, Florida area. The 4-speed Hemi Charger served as David’s daily driver until 1985 when, after 35 years of service, he officially retired from the U.S. Navy. Still all-original, and in great shape, David decided to store it until he could execute a proper restoration. But it wasn’t for another fifteen years that he found the time to work on it. At that point he called on his friend, Ray Younkin, of Pure Muscle Restorations, to help him complete a custom build. Luckily, Ray talked him out of modifying the car. At that point, they found a buyer for the Hemi Charger 500 so David could buy a later model car to modify. The restoration was finished for the new owner in 2006 by Pure Muscle Restorations.

For a detailed look at the 1969 Dodge Hemi Charger 500, click the video window below and listen to the walk-around inspection, joining RK Motors Charlotte on the test drive.