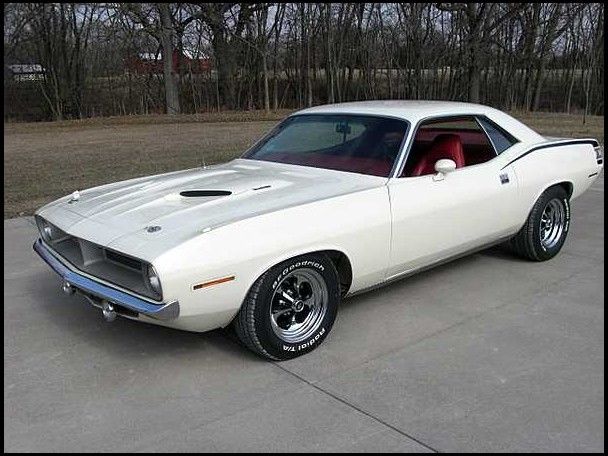 It is genrally considered that the best looking Hemi Cuda was the 1971 edition. Many consider it the finest design of any muscle car ever. Now a Canadian Mopar collector has listed what he considers to be the best of the best, his 1971 Plymouth Hemi Cuda Hardtop fully restored.

Is it the best E-body hardtop out there? He makes a great case for it. First of all, it has less than 50 miles on it. That in itself is amazing. The Canadian collector has it for sale this week. He says it had never been titled or driven on the street until 2007 after an extensive restoration by Mopar restorer Jason Repucci. The restoration is well documented and there are many photos of the car before and after the restoration (view some of them now on the ad page online.)

As you may have guessed there is a great story behind the best looking Hemi Cuda ever. It was originally given to famous NHRA racer Don Grotheer back in the day by Chrysler. Rather than giving Grotheer the parts he needed to build his new ride for 1971, Chrysler sent him a factory original 1971 Plymouth Hemi Cuda Hardtop ordered for him with a four speed, Super Track Pack, tinted glass and the spoiler package with the Go Wing. It came with the 4.10 Dana rear end and front power disc brakes. They also send him an E-body shell in primer. Grotheer immediately stripped the car down for its parts and began building his new ride for ’71. The donor car was forgotten and spent decades in a field in Oklahoma.

It should be pointed out that this car itself was never raced. Many of the other 58 Hemi Cuda hardtops built that year were used up on drag strips and on the streets of America. But the E-body that Chrysler gave to Grotheer sat with almost no miles on it and was eventually given to one of the shop hands by Grotheer. It ended up in a field in Oklahoma where it awaited its turn to be found by a Mopar collector.

In around 2007 it was given to Repucci, a noted Mopar restoration expert, to be given new life at his California shop. His OE restoration is impeccable with extreme attention to detail. It is sprayed with its original W3 Snow White paint. A ton of OEM parts were discovered to complete the build. They say it retains 90 percent of its original sheet metal, floor pans and frame rails. . Documentation includes the factory VIN, factory fender tag and the original invoice from Chrysler to Don Grotheer (see photos in the Slide Show ad.)

An NOS date correct Hemi block was used. The current owner was able to locate the original transmission which was believed to have been stolen from Grotheer’s shop in the early 1970’s. He had it rebuilt, restored and installed in the car it was born in.

This Cuda has been featured in two national Mopar magazines and has attended several world class Mopar shows.
It is considered to be one of the finest restorations of any ’71 Hemi Cuda out there. The incredible provenance with owner history by one of the top NHRA racers of the era adds to its collector value.