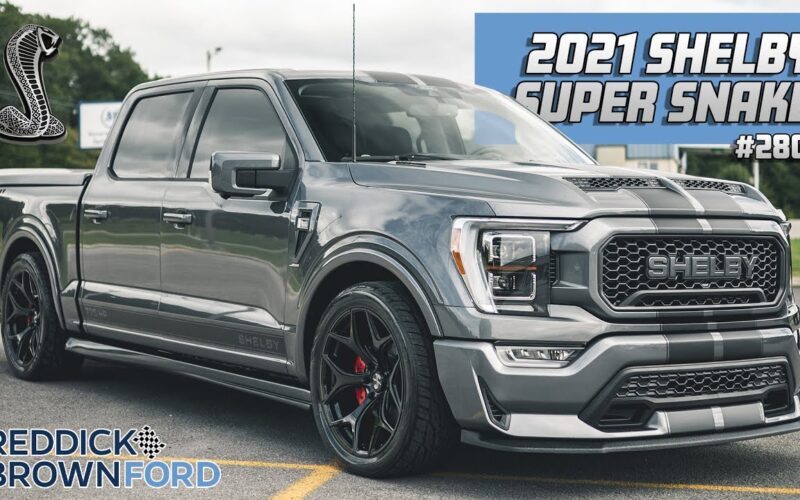 The Super Snake is not only available from Shelby as a Mustang-based sports car, but also as a pickup. In the new model year, the performance grows again.

The current Ford F-150 develops up to 456 hp (in the Raptor version) and offers a maximum torque of 773 Newton meters (as a V6 hybrid). No values ​​with which the pickup bestseller would have to hide. And yet one US tuner after the other presents more or less extensive performance improvements for the Ford F-150. Now quasi-house tuner Shelby is joining the ranks and presenting the F-150 Super Snake, a flatbed truck that simply pulverizes the value mentioned at the beginning.

According to good American tradition, a supercharged V8 is used as the drive source. The five-liter engine, nicknamed Coyote and also known from the Mustang, not only receives the additional charge, but also a new air intake system made of carbon. Shelby also replaces the heat exchanger, throttle valve and injectors. On the exhaust side there is a Borla exhaust system, which ends in two fist-sized tailpipes. The reward for the whole thing: 786 hp, if the F-150 Super Snake is refueled with at least 93 octane gasoline.

A little lower as a two-door model

For the extensively adjustable chassis, Shelby relies on a combination of components from Ridetech and Fox. In addition, the tuner replaces the original wishbones, coupling rods and stabilizers. The wheel sizes, on the other hand, appear astonishingly restrained: The chrome alloy rims measure 22 inches and wear sports tires all around.

The two-door version with regular cab, which is nicknamed “Sport”, is a little lower than the four-door counterpart based on the super crew cab. The short pickup also has an upgraded brake system. The stated performance also applies to him: the sprint from zero to 60 mph (96.6 km / h) should be accomplished in 3.45 seconds. If you then brake to a standstill again, you need 8.3 seconds for the entire exercise.

In order for the F-150 Super Snake to look like a real Shelby, it receives far more than the stripes completely drawn over the car. At the front, the viewer sees the apron attachments with larger air inlets, the new front splitter, the differently designed radiator grille and the bonnet with air scoop. In addition, Carroll Shelby’s heirs have given the pickup a body-colored fender flares including air outlets, four-part rocker panels and painted exterior mirror covers and door handles. The loading area cover and the rear apron attachment complete the visual modifications.

At least as far as the exterior is concerned. On board, the Shelby F-150 Super Snake awaits the occupants with a two-tone leather interior, many carbon applications and embroidery in the headrests. The instruments bear the signature of the legendary company founder. There are tinted windows and high-quality floor mats as well as new metal pedals and various badges and tablets with the model name and serial number. The latter can also be found on the engine cover.

Of course, such number games only make sense if a car is limited. This is the case with the Shelby F-150 Super Snake: The company, which is now based in Las Vegas, wants to build a maximum of 600 copies, with the series being divided equally between two and four-door models. Prices start at $ 98,690 for the short hardcore pickup. With a long cab it costs at least $ 105,708 (just over 90,000 euros). The respective F-150 base cars in XLT or XL equipment are already included.

Shelby insists on showing the new F-150 Super Snake during Monterey Car Week. Whether the rough leg will fit the lineup otherwise presented there – Lamborghini Countach , Aston Martin Valkyrie Spider or Specter Type 10 , to name just a few – seems questionable. On the other hand, the noble event in California shows once again what makes the car world so varied.