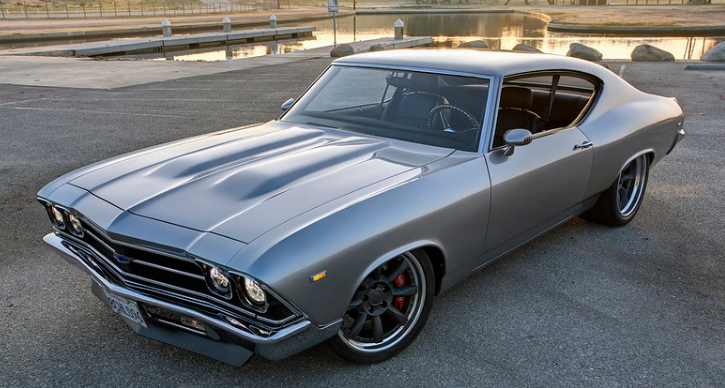 Some of you will probably recognize this custom 1969 Chevelle as it was displayed at SEMA 2018 and featured in Super Chevy Magazine. Built for Andy Lezotte by Ironworks Speed & Kustom, this is one magnificent pro touring muscle car.

Back in the day Andy’s first car was a Cortez Silver 1969 Chevy Chevelle. He tried to buy it back from the current owner multiple times, and once he realized that’s not going to happen, Andy decided to get another car built for him.

The guys at Ironworks Speed & Kustom have done a tremendous job on this 1969 Chevy Chevelle. With nearly 4,000 men hours into the build, they have created a timeless hot rod, which brings a lot of smiles per gallon to Andy and his Sons.

The 1969 Chevy Chevelle sits on Speedtech Performance Extreme chassis and Forgeline wheels. The beautiful interior was done by Sid Chavers. The engine is a Supercharged LSA pushing 700hp controlled by 6-speed Tremec transmission.
Check out the video to see and hear more of this custom 1969 Chevy Chevelle.