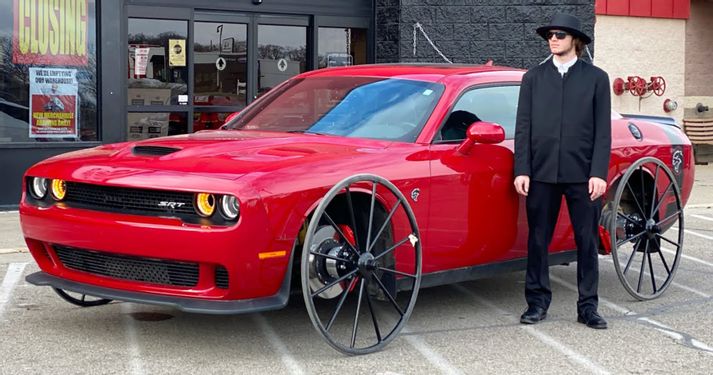 After previously experimenting with buggy wheels on his Sierra Duramax, WhistlinDiesel is trying them on his Hellcat this time around.

Long before the first automobile was invented, people were transported from one place to another via horse-drawn carriages (or buggies). Even to today, some places and cultures still use horse and buggies as their main mode of transport. While such buggy-wheeled transports are pulled by a horse or two, here is a buggy-wheeled metallic vehicle pulled by 717 horses. Owned by YouTuber WhistlinDiesel, this Dodge Challenger SRT Hellcat rides on four buggy wheels.

No, this isn’t a joke, WhistlinDiesel (whose real name is Cody Detwiler) actually replaced the modern wheels and tires of his red Dodge Challenger SRT Hellcat. All else remained untouched, including the fact that this Hellcat monster is still able to accelerate on the road by 717 horses derived from a supercharged 6.2-liter V-8 engine under the hood.

This isn’t actually the first time that Cody has fitted buggy wheels onto a vehicle. Some time in October 2019, he had his lifted GMC 2500 HD—powered by horses from a Duramax engine—fitted with buggy wheels. It was a big time failure, simply because the buggy wheels offer none-to-little traction off the road. The GMC 2500 HD became sluggish and the original wheels and tires had to be fitted back.

A lot lighter than the GMC 2500 Duramax, a Dodge Challenger Hellcat might be a suitable vehicle to ride on buggy wheels. Cody, who recently managed to survive a gunshot to the head in a freak accident, thought that fitting buggy wheels on his Challenger Hellcat would be a great idea to gain more YouTube views. Well, he succeeded since his uploaded video now has more than 4.7 million views and counting.

Nonetheless, fitting buggy wheels to a Challenger Hellcat wasn’t enough; Cody had to drive the car to town. Donning an Amish-like suit, Cody braved the cold weather and paraded his buggy-wheeled Hellcat into town. It sure grabbed attention, with people seemingly unable to resist smiling and gazing at this combination of modernity and antiquity.

Of course, a WhistlinDiesel adventure wouldn’t be enough without some stunts. So, Cody had the Challenger Hellcat do some burnouts. It looks really amazing, especially since you can’t do burnouts in an actual horse and buggy. So what’s next, a buggy-wheeled General Lee?