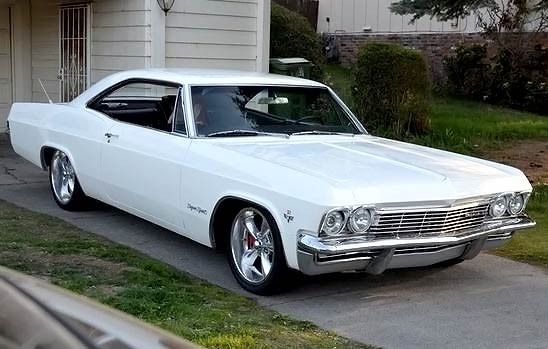 A true Impala Super Sport that was the subject of top notch rebuilding, this sweet cruiser is certainly worked for the long haul. From easygoing looks to long looks, the vehicle radiates a feeling of value that comes from innumerable long stretches of work and genuine charge card bills.

With straight boards and great board fitment, its body sets the norm for what’s in store from the remainder of the form. What’s more, everything is improved by velvety 2-stage that would’ve been incomprehensible in the large scale manufacturing world in 1965. In the engine, an even six liters of demonstrated GM LS2, tuned by Garner, North Carolina’s RPM Motorsports, turns 378 back tire drive into 329 lb./ft. of back tire force! Behind that plant, a demonstrated 4L65E 4-speed channels force to an intense 10-jolt hub.

That drivetrain rides a reconstructed and brought down suspension that has been enlarged with cylindrical control arms, thick influence bars and 2-inch drop axles. Stops are given by 4 and 6-cylinder Wilwood calipers, which snap a group of four of bored and opened rotors. And all that mechanical goodness moves on chrome plated Ridler haggles Goodrich g-Force Sports. Between the entryways, a custom cockpit is focused on Modern, Impala-marked pails that component power change for the vehicle’s driver. A Deep Blue scramble hangs Dakota Digital VHX telemetry above equipment for the vehicle’s cutting edge cooling.