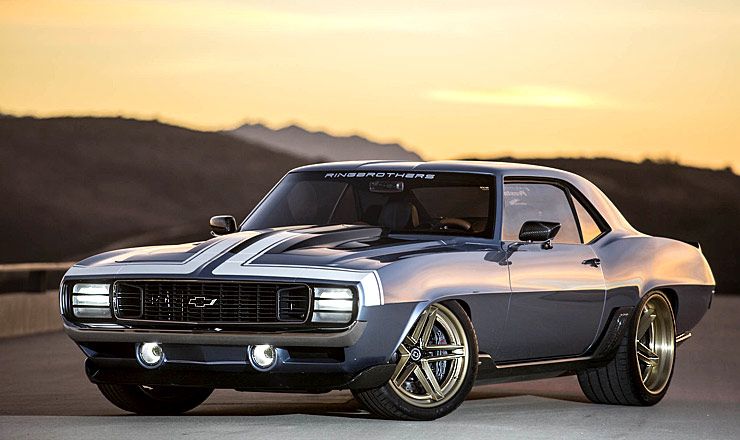 Like other Ringbrothers builds, the Camaro G-Code started as a ratty classic – in this case, a ’69 Camaro RS. And yes, this Camaro is a masterpiece which beside the ‘69 classic body everything else has been modernized. In order to make this Chevy what it is, every detail has been precisely crafted till perfection.

From the technical aspect this 1969 Chevrolet Camaro is powered by a Whipple Supercharged GM’s small-block LS3 V8 engine, which generates over 1000 horsepower and which is put down through a Tremec six-speed transmission. The large golden HRE Performance Wheels are also designed by the Ring Brothers and wrapped with Michelin Pilot Sport Plus tires. While the braking performance comes from the powerful six-piston Baer brakes with four slotted rotors.

The exterior of the Camaro, in traditional Ringbrothers fashion, is breathtaking. The vehicle is finished in “Blue Print,” while the body features custom touches like hand-laid carbon fiber on the hood. The interior features the same amount of exquisite detail with custom work by Upholstery Unlimited.

You’re not paying for safe, though; you’re paying for a one-of-a-kind experience that keeps you enthralled every time you get behind the wheel. Ringbrothers doesn’t do “off the shelf,” and the G-Code ringing up at $600,000. The price shouldn’t be surprising: almost every part has been touched and molded by either Jim or Mike’s own hands.