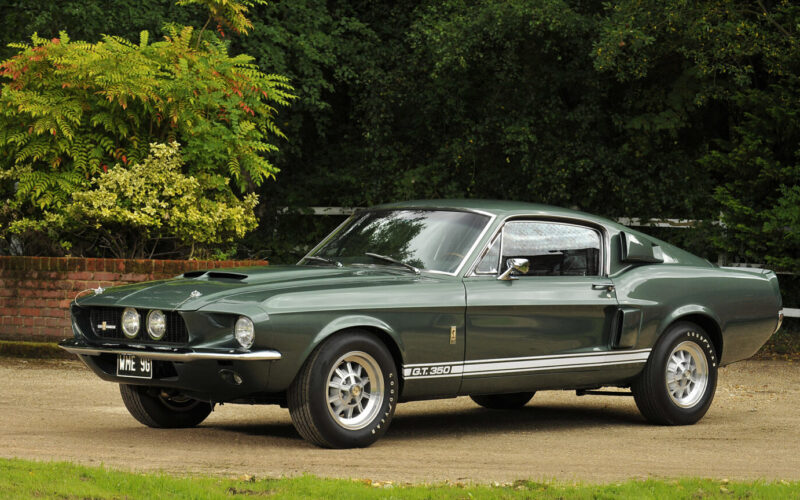 For 1967, the GT 350 carried over the K-Code high performance 289 with a ‘COBRA’ aluminum hi-rise. The GT 500 was added to the lineup, equipped with a “Ford Cobra” V8 (FE Series 428 cu.in.) engine with two four-barrel carburetors sitting atop a mid-rise Aluminum intake manifold.

The 1967 redesign made for a heavier Mustang, along with a longer, fiberglass hood, and new front and rear facias. You can still see the design of the original 1965 version, but these styling upgrades gave the car a more aggressive appearance. The separate high-beam headlamps on the edges of the grille added more character, while a thin, chrome front bumper sat below a mesh grille with the classic “Shelby G.T.350” logo in place.

Also, a fairly dramatic hood scoop up front hinted at the power lurking underneath. Shelby also included new, horizontal taillights and a spoiler. Also, functional rear brake-cooling scoops adorned the rear quarter panels. Chrome was very nicely integrated on the G.T.350, with a lower bumper and exhaust tips slathered in the shiny stuff. Overall, it was a nice-looking rear end that echoed the muscular treatment up front quite nicely. Ten-spoke, fifteen-inch, cast-aluminum rims were the wheel choice with Goodyear white-lettered radials.