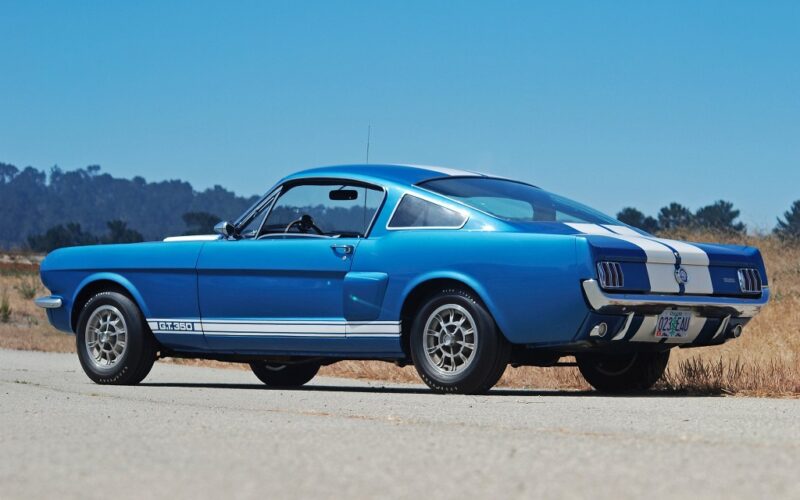 1965 was the first year the GT package was introduced in the Mustang line-up under the name “GT Equipment Package”. This included a V8 engine, fog lamps mounted on the grille, stripes on the rocker panels and disc brakes. As opposed to the base version, the GT was equipped with a four-barrel carburetor, and later, reverse lights became an option.

Carroll Shelby had been tapped by Ford to develop a high performance version of the Mustang for SCCA B-production-class racing. In order to meet the January 1, 1965 deadline, Ford shipped three white 1965 Mustangs equipped with the 289-cubic-inch (4.7-liter) V-8 making 271 hp to Shelby’s Venice shop from its San Jose, Calif. production line. Shelby would use one car to develop the street-legal Mustang Shelby GT350 that he needed for homologation purposes, while the other two would be used to develop the Shelby GT350 R.

The street-going Shelby GT350 was finished in time for it to be driven by the legendary Peter Brock from the Shelby shop to Beverly Hills for a photo shoot. In order to give the appearance that Shelby had completed more than one car, the GT350 was photographed with steelies on the driver’s side, and a pair of prototype Cragar cast-aluminum wheels on the passenger side. Soon thereafter it was sold to its original owner, and converted into a GT350 R specification.