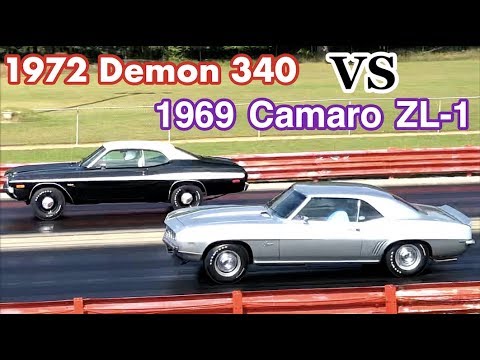 Now THIS is a great match-up! These cars weren’t paired together. Both of their opponents had mechanical issues so they decided to race each other one time. The first, the Camaro of all Camaros…. 1969 Chevrolet Camaro ZL-1. These things are unbelievably rare. They only made 69 of them! Obviously several have been destroyed, so to even see one any more is crazy! They come up for auction on a rare occasion, and a few years back one went for over $800,000!!!! The ZL-1 is just a straight up nasty drag racer. We’re talking over 500 horsepower and over 500 ft-lbs of torque. But don’t sleep on its opponent. We’ve got a 1972 Dodge Demon 340. These cars were light and that 340 was definitely underrated by Dodge. The compression was starting to drop a lot in 1972, but this one still brings a pretty good punch. Who do you think will win? Both of these cars are featured in the Pure Stock Muscle Car Drag Race series.