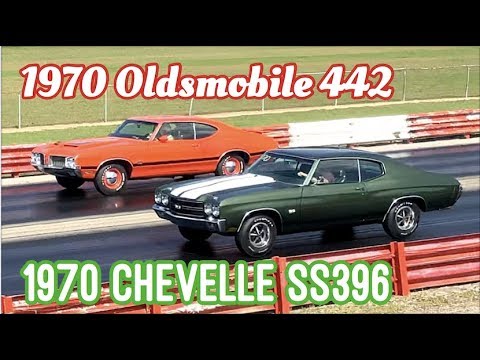 What another fantastic match-up! This week is a 1970 Chevrolet Chevelle SS396 and a 1970 Oldsmobile 442 W30. 1970 was a great year for both the Chevelle and the 442, so I was ecstatic to see these two duke it out. Both cars are interesting in that their advertisements numerically are strange.. I think most people know that the 442 was a package, not the engine size; this one is stuffed with a 455ci big block. What some people don’t realize is the Chevelle was also numerically interesting in 1970. The name SS396 remained, but it was actually a 402ci engine. Pretty cool. I suspect the Chevelle was significantly underrated at 350 horsepower. I would love to own either of these cars. Thanks again to the owners for actually DRIVING these cars and letting all of us enjoy them!

The pure stock musclecar drags take place every September in Michigan. The most important rule: your muscle car must be stock. Other rules include that the cars must be built between 1955 -1975 in either United States or Canadian assembly plants with a minimum warranty of 12 months and 12,000 miles, and cars must be factory equipped with the minimum of four barrel carb ration, dual exhaust, and other factory installed equipment that promotes high-performance intent and image (AKA a musclecar).

The engine must be factory correct for the year, model, and horsepower claimed.

The transmission must be correct for the year, make, model, and horsepower claimed. Shift improver kits are allowed.

The rear axle must be of the same manufacturer as the car. Any gear ratio is allowed. Lightweight driveshafts NOT allowed.

The carburetor must be correct for the year, make, and horsepower claimed. Jetting and metering changes are permitted. The choke assembly must be in place and functional.

Cast-iron exhaust manifolds are mandatory and must be correct for the year, model, and horsepower claimed. Internal modifications to the exhaust manifolds are NOT allowed. Under no circumstances will headers be allowed, including those cars that came with headers delivered in the trunk. The exhaust system may be upgraded to a maximum of 2.5-inch head and tail pipes. Pipes must be routed as they were originally for the year, make, model, and engine combination. Mufflers must be stock looking in design, that is, oval in shape. No glasspacks or straight pipes allowed unless installed as original equipment.