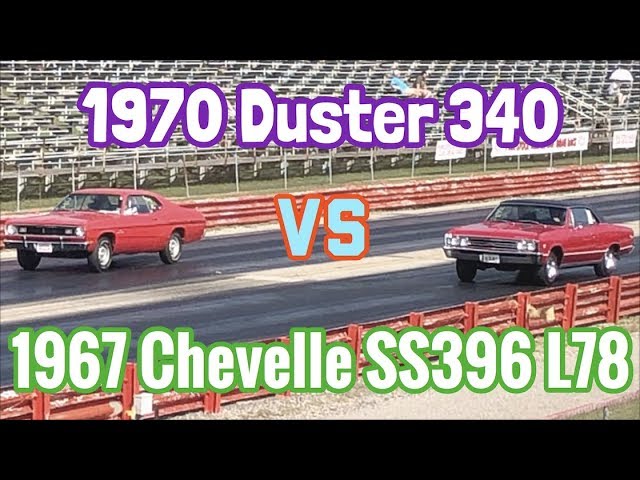 If you enjoy the drag race videos, please make sure to “like” and subscribe and I’ll keep posting them!

Featured are two fantastic cars. I really think the 1970 Plymouth Duster 340 is one of the best deals in the musclecar segment right now (similarly, the Demon 340). The engine was underrated at 275 horsepower, it doesn’t weight very much, and it can move! Prices aren’t terrible, with fully restored versions under $30,000 right now. Those cars always surprise me on the drag strip. Could you imagine picking up one of those brand new for 17K (adjusting for inflation)??? Then we have it’s competitor… a VERY rare 1967 Chevrolet Chevelle SS396 with the L78 package. Now, I must admit, I’m not entirely sure of that car is a true L78, but I believe at last year’s Pure Stock Muscle Car Drag Race event that they stated it was. Regardless, it is reported as being the 375 horsepower version. What a great looking car. 1967 was a fantastic year for the Chevelle and it sold incredibly well. It’s on my list of cars to buy in the future… just like the Duster 340. Which do you think will win??? Both of these cars are featured in the Pure Stock Muscle Car Drag Race series.