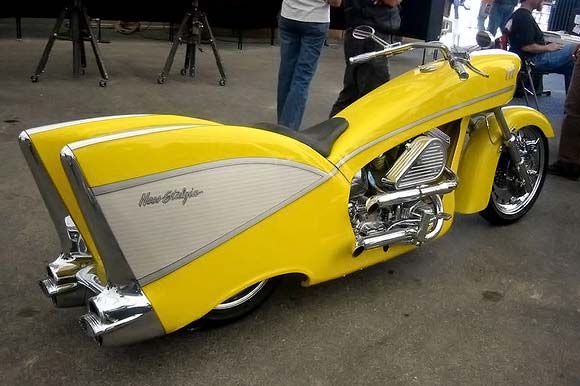 LAS VEGAS Seems like everyone knows the look of a classic 1957 Chevrolet, whether its the chrome rockets on the front or the jutting tailfins in back. But when comes to finding those same distinctive features on a motorcycle, now that’s a surprise.

Sure enough, a motorcycle builder who goes only by the name Lupo, from Toulouse, France, says the 11-foot-long motorcycle that he built to pay homage to the ’57 Chevy took 3,000 hours to build.

The bike has touches from the famous Chevy throughout, including that massive tailfin made by splitting a replica pair and combining them. Lupo says the idea for the motorcycle came from a customer, who later dropped out of the project, and he took it on himself.

We found Lupo here last month at the SEMA aftermarket auto parts, one of scores of car fanciers who staked out their machines in the massive convention center parking lot.

The engine is from a Harley-Davidson but that he had to pretty much make everything else himself. How’s it ride? “Really safe and comfortable,” he says.