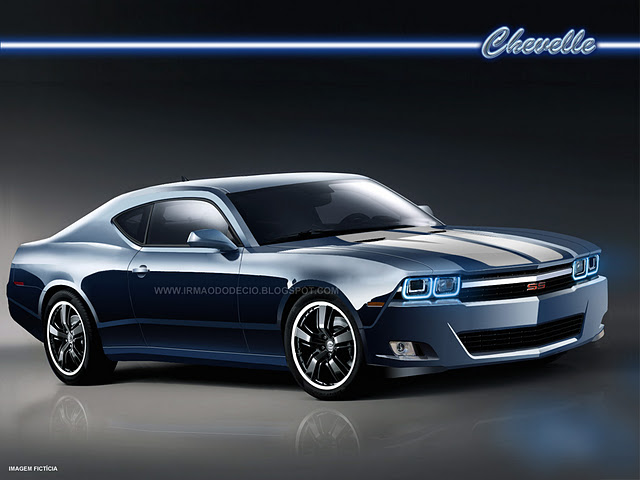 Chevelle was one of the most popular muscle cars without a doubt, we have received some incredible engines under the hood of these iconic vehicles over the years.

Those times are gone and now some of the modern muscle cars even went for four cylinder turbo engines which is kinda sad even though it does offer good performances.

Let’s turn to the topic, the last third gen was in production until 1977 meaning that has passed a long time since the final units were delivered, but again, this might not be an obstacle for the company to reintroduce it to the market.

For the car to be successful, it would need to pay homage to the original but to be modern and in line with other vehicles offered in the segment.

What we will talk about again is the need for the car maker to bring iconic looks of the most popular version and to combine it with all the latest tech.

We can see more than a few great examples of this today and when we add that vehicles like Chevrolet Camaro and Ford Mustang are near and even above 100,000 units per year it is a logical move for a carmaker to bring another model that could further boost sales figures of the company.

On the other side you need to get real and consider the possibility that: 1. it’s quite impossible to come up with good names for all of the cars.

Eventually, you’re going to run out of good name ideas which are short, easy to say and catchy.

With a number of vehicles on sale today, that task is hard and next to impossible. Then we have the fact that manufacturers are banking and playing on a car’s history and heritage so they can sell more units.

Think for example the Ford Mustang. If they renamed it after the first gen, it wouldn’t have even half of the appeal today, would it? Yes, you could make an argument that it’s a continued evolution rather than building a “tribute” almost 20 years later, but the point stands.

When it comes to cars and boring names, a majority of people don’t care if you will use the name again or not.

If it’s only a consumer vehicle to get you from A to B for your average Joe, who cares right.

But, once you get into the luxury cars, the sports cars, the El Caminos and the Chevelles, it matters a lot.

Rumors regarding the new El Camino have been circulating the internet for a while now, but it seems that almost all of the glory has been stolen by the “new” Chevelle.

The current Chevrolet SS has faced problems in selling lately.

In 2015 only 3000 units were sold, this makes it one of Chevy’s worst models at the moment (sales and profit wise).

We might soon see it get discontinued which leaves the question: will the Chevelle take its spot? Well, the guys at Chevrolet don’t want to give much detail so they’re neither denying nor agreeing with the fact that a Chevelle model for sure will soon join the lineup.

Personally we think that if the SS gets discontinued, we will see a Chevelle return simply to boost profit and fill the gap.

We are not saying that Chevrolet will do it simply for profit, but the fact of the matter is that if the SS was named Chevelle, some clever advertising with the name could have seen it skyrocket the sales up to 3, 4 or even 5 times as much. We’ll let you read into that on your own, but if there’s one thing certain, it’s that the name brings a lot of attention and popularity or lack of it to a car.

We still have some time to wait and see what will happen, but for sure we woulndt mind receiving a rear-wheel driven, four-door Chevelle.

And especially one that hides a large 6.2-liter V8 under the hood with upwards of 400 hp.

Well, we say that but the reality is that the base engine will most likely be a 3.6-liter V6 with around 300hp. Still, that’s not bad, considering you’re pushing around 280 lb-ft of torque. It’s the V8 where all the fun starts. No, it’s not all about the power, but the sound of it as well.

The six-speed manual is almost certainly going to happen (if the car gets built ), but there’s always the option of a six-speed or an eight-speed auto.

Power should be sent to the rear wheels only, but with the current state of the sedan market, we wouldn’t be surprised if it gets all-wheel drive as well. Markets that get affected by heavier snow tend to go for all-wheel drive cars (Canada, parts of U.S.) and having an AWD sedan for those regions might prove to be a hit on sales.

Based on some calculations taking into consideration when the SS should be retired and a host of other factors, we’re sorry to say that the Chevelle won’t see the light of day before 2021 at best.

But think at it this way: you have all that time to hope that it gets built and in the meantime, enjoy GM’s other products. The Camaro seems to be a great place to turn at a time like this.