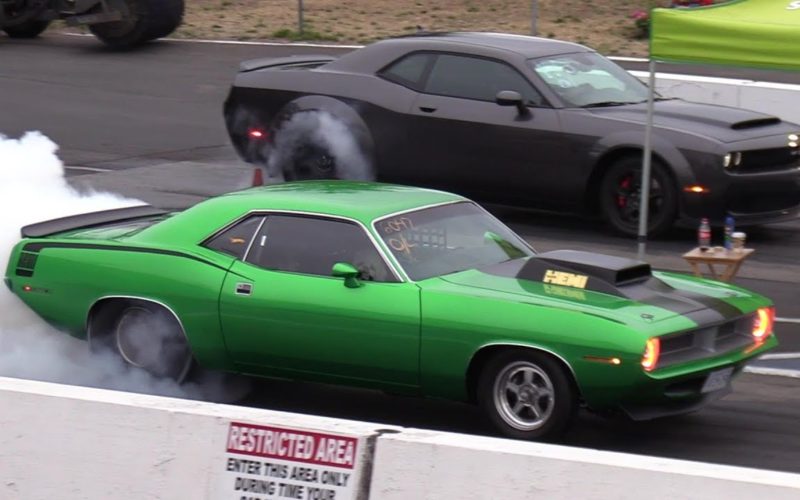 Watch a cavalcade of American muscle cars (and at least one German supercar) compete in drag race action.

Once again, Wheels.ca delivers unto us a bounty of drag races that make us wish we were actually there in beautiful Burnaby, British Columbia so that we could take part in all the drag racing excitement. Sadly, we must content ourselves to watching from afar thanks to the power of the interwebs.

This video has so many great matchups that we won’t be able to cover them all here, but we’ll certainly whet your appetite with the first few matchups, starting with everyone’s favorite dragster: the 2018 Dodge Challenger SRT Demon.

If you’ve been paying even the remotest amount of attention to this here web space, then you already know that the Demon has a 6.2-L supercharged HEMI V8 with 840 horses on tap (provided you feed it the right fuel, of course). And you know that it’s capable of a mid-2-second zero to sixty time and a 1/4-mile time in the 9s if the stars all align.

As impressive as the Demon is, it’s not the be-all end-all of drag racers. On the opposite side of the line is a last-generation Plymouth Barracuda, which puts it from 1972-1974. When it was new, it had a 426 cubic-inch (7.0-L) HEMI V8 with 425 hp. That’s no longer the case, as this ‘Cuda has been given some lovin’ in all the right places, with a big center stack poking through the engine that just has to be hiding a supercharger.

The Plymouth actually beats the Demon, who posts a time of 10.36 at 134.32 mph. We don’t know how fast the Plymouth was going since the lights were sadly burnt out, but we know it was faster.