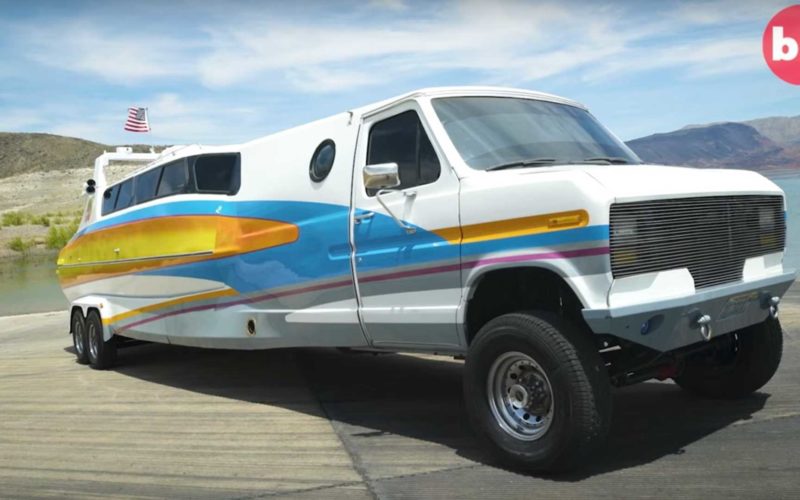 This is a boaterhome; half vessel, half van, and all completely crazy.

The ’80s were loaded up with bunches of bizarre things. Parachute pants? Suit coats with shoulder braces? Runaway expansion? Every one of these things can be followed back to the ’80s.

The ’80s were additionally loaded up with a great deal of insane vehicle thoughts. One of them originated from Ford and was known as the Boaterhome. It’s fundamentally a Ford Econoline van that has been slashed down the middle and transformed into a versatile towing stage for a pontoon that fits flawlessly inside the emptied out shell of the van.

Only 21 of these vehicles were made, likely inferable from how they were extravagant and furthermore how no one was getting them.

Because of Barcroft Cars, we get the chance to see a direct take a gander at John’s Boaterhome that he utilizes as a kind of land-based gathering journey in Las Vegas. In spite of the fact that it doesn’t invest all that much energy in the water nowadays, John says the Boaterhome is really a family legacy. His dad got it when he was only 10 years of age and the bizarre vessel/van half and half has been in the family from that point onward.

CAR ENTHUSIAST John Ortlieb, from Nevada, is the proud owner of not one, but two ‘Boaterhomes’ – a spectacular half boat, half van hybrid. John inherited one from his father and purchased the second nearly ten years ago. His father’s, which stands at 36 feet-long, can travel up to 40mph on water and over 100mph on land. Only 21 of these unique vehicles exist, and John’s, built in the eighties was based on a Ford Econoline Van. The limited-edition hybrid is not just used as a boat, home and vehicle, but also as a unique party venue that you can often see cruising down the Las Vegas strip.