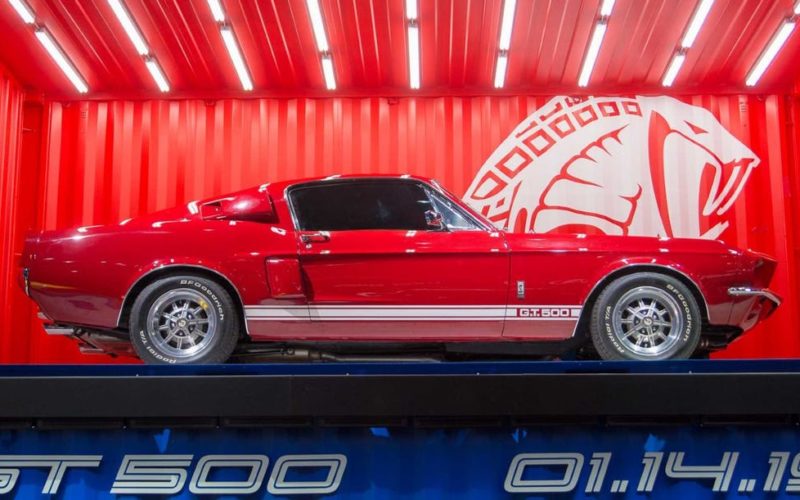 Ford has confirmed the upcoming Shelby Mustang GT500 will be revealed at next year’s Detroit Auto Show.

After endless speculation, fake leaked photos, and spy pics from around Ford’s test track, the oldest carmaker in the world is finally going to take the cover off the upcoming Shelby Mustang GT500.

But it won’t be at the Los Angeles Auto Show as some might have hoped. Instead, we’ll have to wait for the 2019 Detroit Auto Show to finally see a 2020 GT500 in the flesh.

The date was previously speculated but unconfirmed through official sources. Now we have a few undeniably official confirmations that the unveiling date will be January 14th, 2019.

Our first clue comes by way of several photos taken at the LA Auto Show gets set up. What we see is a classic 1967 Shelby GT500 in a red shipping container with some fancy blue lights surrounding it. Underneath the antique ponycar reads the date of 01/14/19.

Perhaps even more interesting is the little info card that sits directly beneath. It says that the GT500 will be “loaded with race-proven Ford Performance technology and powered by a supercharged V8 that delivers over 650 hp.”

That number might seem a little disappointing, especially since previous rumors put the GT500’s power levels at over 700. Having just over 650 makes it more powerful than the Ford GT, but since the GT500 is likely also heavier, it now seems unlikely that the car will outperform the GT in any meaningful way.

But it’ll definitely be the most powerful Mustang ever built, so there’s that.

Ford Performance also confirmed the 01/14/19 date by releasing a teaser image on their Facebook page (as pointed out by Motor1). You can see the engine cover of what is quite obviously a supercharged V8 with the Shelby Cobra logo with the date printed on a plaque.

We still expect the GT500 to at least come with the same 7-speed dual-clutch as found on the GT, and probably an optional 10-speed automatic that Ford loves to throw around. Beyond that, we’ll have to wait till next year to find out more.