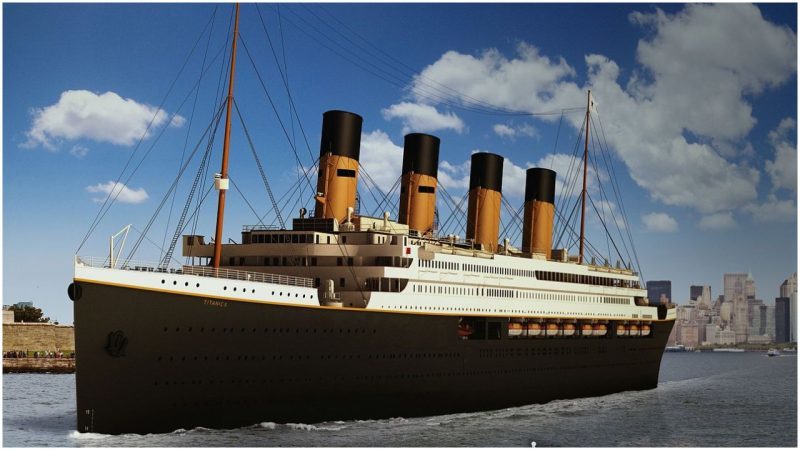 Artists impression of Titanic II leaving New York Harbor. Photo by Roderick Eime CC BY 2.0
Titanic II is on the way, but it’s not a movie. A replica ship is being made in China and aims to give passengers a luxury traveling experience with a historical flavor.

Since its spectacular sinking after hitting an iceberg in 1912, the Titanic has become a morbid but intriguing aspect of popular culture.

Movies, memorabilia and even a musical have emerged from the tragedy. But this is arguably the ultimate tribute.

The recreation is the brainchild of billionaire Clive Palmer. As quoted on the BBC News website, he said “For over a century Titanic’s legend has been powered by mystery, intrigue and respect for all she stood for… Millions have dreamt of sailing on her, seeing her in port and experiencing her unique majesty. Titanic II will be the ship where those dreams come true.”

Blue Star Line in Brisbane are undertaking the work, which hasn’t been without its setbacks.

Titanic I faced a dangerous iceberg, whereas Palmer’s project was tied up in a legal battle. First announced in 2012, the operation ground to a halt in 2015 after what are described as “disputed royalties from a Chinese conglomerate.”

With that matter resolved, Titanic II is expected to set off from Dubai in 2022, taking a 2 week maiden voyage to Southampton.

This iceberg was pictured in the morning of 15 April 1912 and is thought to be the one that the Titanic had struck.

After that it will sail to New York, mirroring the original journey. It was on this leg, out in the North Atlantic Ocean, that the ship had its fateful encounter.

As the clock ticked toward midnight on April 14th, an iceberg was spotted. While RMS Titanic had time to avoid a head on collision, it was sliced open under the waterline by what History.com calls “a jagged underwater spur.” It was big and powerful enough to tear a 300ft hole along the hull.

The Titanic took approximately three hours to sink. It contained “2,240 passengers and crew — or ‘souls,’ the expression then used in the shipping industry, usually in connection with a sinking — on board.” Only 705 survived the night.

A product of fierce competition between maritime industries, it’s believed in some quarters that the boat was rushed into the water by the White Star Line. They sought to challenge rival company Cunard.

According to the book What Really Sank The Titanic by Jennifer Hooper McCarty, “metal experts contend the vessel’s manufacturer, Harland and Wolff, was under great pressure to secure enough iron to make three million rivets to stitch the ship’s metal plates. In the rush to beat competition from Cunard, the White Star liner was supplied with a vessel that was made using substandard materials.”

Other factors that contributed to the disaster included a lack of planning with regards lifeboats. History.com also draws attention to the hull design, which at the time was thought to be “unsinkable.”

It writes that “Titanic was doomed from the start by a design that many lauded as state-of-the-art.”

View of the bow of the RMS Titanic photographed in June 2004.

This included “15 watertight bulkhead compartments equipped with electric watertight doors that could be operated individually or simultaneously by a switch on the bridge.”

However, it “contained a flaw that was a critical factor in Titanic’s sinking: While the individual bulkheads were indeed watertight, the walls separating the bulkheads extended only a few feet above the water line, so water could pour from one compartment into another, especially if the ship began to list or pitch forward.”

These factors have passed into legend and were no doubt considered by Clive Palmer and his team.

Titanic II has proved a controversial proposition. Yet that was nothing compared to a similar idea, again taking place in China.