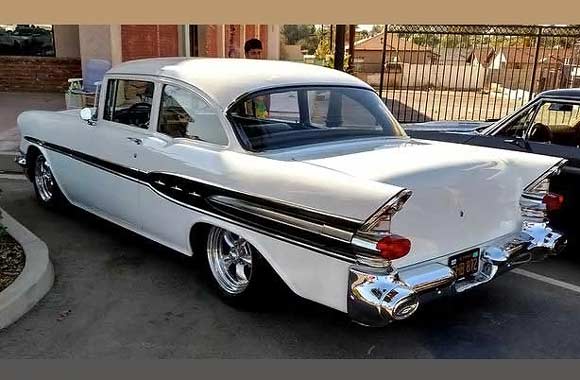 I thought you’d like a look at this extremely rare 1957 Pontiac Bonneville Convertible. 1957 was the first year for the Bonneville and it was only offered as a convertible. When it was introduced, the Bonneville was the fastest Pontiac ever produced. This Bonneville is number 116 of the only 630 produced in 1957. This is probably the finest restored example ever offered for sale. It has been treated to a correct frame-off/rotisserie restoration. Every part of this car is 100% factory correct and numbers matching. Every component was restored to as new or better condition. Most of the chrome was NOS and it all, the interior and exterior was show chrome plated. The Bonneville is painted in Kenya Ivory with a Tartan red interior. Boasts a fuel injected 347 300+hp( approximately 315 HP) V8, Hydra-Matic automatic transmission, Wonderbar AM radio, a deluxe ivory steering wheel, a padded dash, a clock, cowl vent, chrome wheel discs, and whitewall tires. It has the total power group including a power-operated convertible top, a power antenna, power steering, power brakes, power windows, and an eight-way power-operated seat. This Bonneville was judged 396 out of 400 at the Pontiac Oakland Club Nationals and has been awarded in every show it’s been shown at. The 1957 Bonneville is a very rare car. This Bonneville is one of the best of its kind in the world – it is pristine museum quality. Thanks for taking a look!