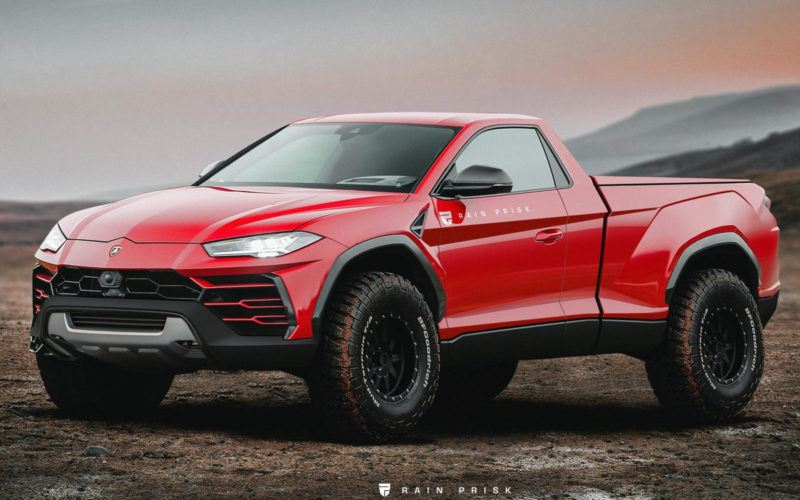 What if Lamborghini decided to take on the world’s most hardcore trucks?

Love it or loathe it, the Lamborghini Urus is an undeniably impressive machine. Thanks to its twin-turbo 4.0-liter V8 producing a monumental 641 horsepower and 678 lb-ft of torque, this super SUV will do the 0-62 mph sprint in 3.6 seconds and hit a top speed of 189 mph. This earned it the title of the fastest SUV in the world, until the Bentley Bentayga Speed stole the crown. It’s also a surprisingly capable off-roader.

While the idea of Lamborghini producing an SUV may have seemed sacrilegious at first, its success has already inspired other supercar makers such as Ferrari and Aston Martin to jump on the lucrative SUV bandwagon. But what if Lamborghini explored other segments?10

After converting the Toyota Supra into a hardcore off-roader, render artist Rain Prisk has imagined what would happen if Lamborghini decided to enter the pickup segment and take on the Ford F-150 Raptor and Jeep Gladiator. From the front, you could be fooled into thinking this is a regular Urus SUV, as the aggressive styling has been left unchanged. Jeep took a similar approach with the Gladiator, which is still recognizable as a Wrangler from the front.

Removing the back of the Urus has resulted in a surprisingly photogenic pickup. The proportions suit the segment well, and the fender flares are now much more prominent. The render artist has also lifted the ride height and added some chunky all-terrain tires to create the hypothetical Urus pickup truck.

Admittedly, the chances of Lamborghini building a pickup truck seem highly unlikely, but there could be a coachbuilder out there willing to convert the Urus into a hardcore truck if there’s enough demand.1