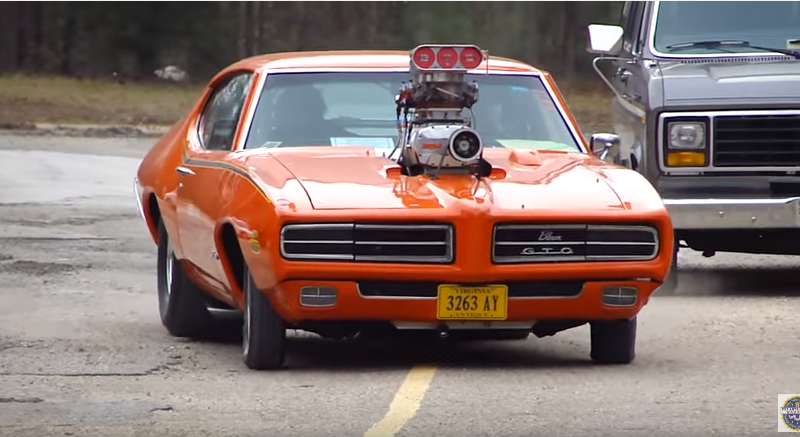 For many of us, the 1969 GTO Judge is a special machine. Here we see a 1969 Pontiac GTO Judge, modified with a massive blower atop a powerhouse of an engine. See (and hear) the powerful surge of this finely tuned muscle car at the 0:26 mark, and later on in this 2-minute video, get a look at its incredibly wide 19.5” by 33” by 15” rear tires as the Judge cooly parades the neighborhood. This model is owned by the aptly named “GTO Mike.”

The Judge came out in 1969 and only lasted until 1971. It was only planned as a one-year promotion, but the Judge’s sales carried the model onward to its 1970 and 1971 releases. It was intended to be a lower-cost GTO in order to compete with the popular Plymouth Road Runner.
According to Classical Pontiac, The Judge, named after a line on Rowan and Martin’s Laugh-In, was pitched to the hip youth market with a psychedelic TV commercial featuring a performance by Paul Revere and the Raiders, singing “Judge – the special great one from Pontiac GTO.” The muscle machine was equipped with an L74 Ram Air engine, a Hurst shifter with a special T-shaped handle, and Rally II Wheels without trim rings.

This excellent blown GTO Judge deserves your attention. Have a look in the video below, and SHARE if you’re a fan of Judges.