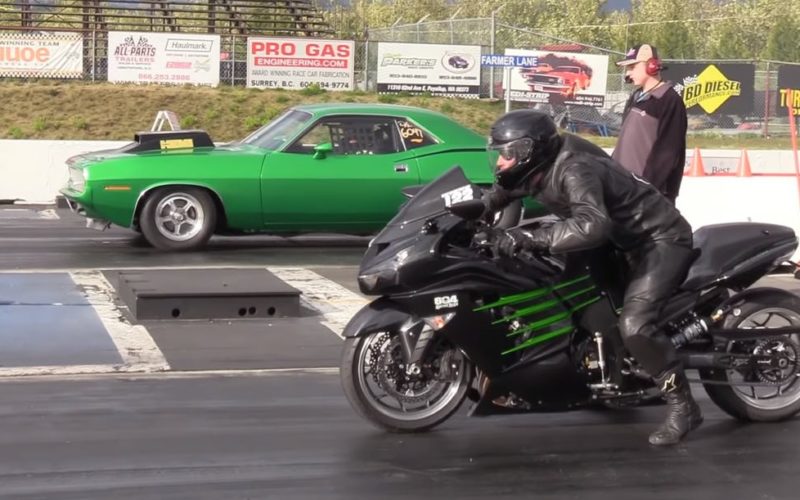 Watch a slightly (okay, more than slightly) modified 1970 Plymouth Barracuda take on a Kawasaki Ninja ZX-14 in a drag race.

We have seen both of these fine machines compete before at Mission Park Raceway. The Plymouth Barracuda we know to be an extremely potent vehicle with a reported 900 horsepower from a heavily modified 7.0-L (426 cubic inch) HEMI V8. We suspect it’s closer to 1,000 horsepower, given how effortlessly it can run a quarter-mile in just 9-and-a-half seconds.

That beats the Dodge Demon’s 9.65 seconds, in case you were wondering.

But its opponent, the Kawasaki Ninja ZX-14, is also no slouch. In fact, this little rice rocket already has an insane power to weight ratio thanks to its 1,441 cc four-stroke inline four-cylinder engine pumping out 207 horsepower on a chassis that only weighs 593 lbs soaking wet. Zero to sixty is done in just 2.5 seconds with a limited top speed of 186 mph.

Those are stock numbers. Given the extended rear fork and the lack of muffler, we suspect there has been some work done to this bike’s engine that makes it even faster.

Last time we saw the Kawasaki run, it managed to finish the quarter-mile in just 9 seconds at 150 mph. That seems a little out of the Barracuda’s league, but we’ll give the old Plymouth the benefit of the doubt.