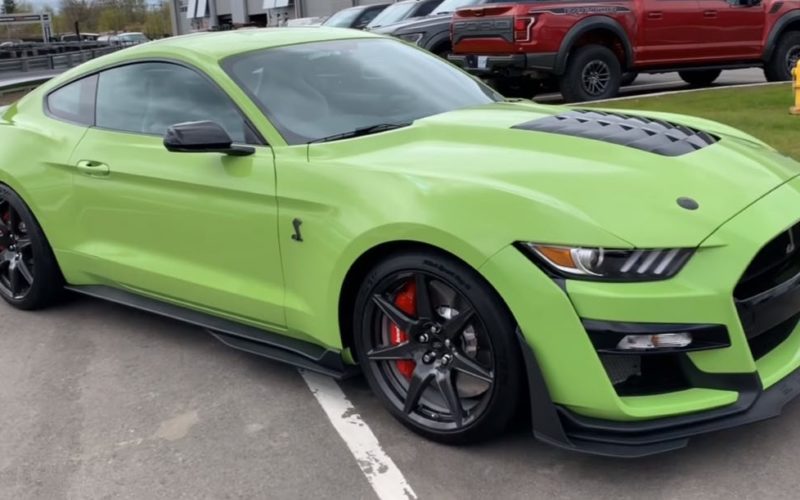 We get up close and personal with the new 2020 Ford Shelby Mustang GT500 decked out in Grabber Lime.

The 2020 Ford Shelby Mustang GT500 is coming. We know that it will arrive with a 5.2-L supercharged V8 with over 700 hp. We’ve been told by Ford that it will accelerate from zero to sixty in just 3 seconds and run a sub-11-second quarter-mile time. We also know that top speed will be limited to 180 mph for no particular reason that we can determine.

We expect that governor to be removed by quite a few GT500 owners.

What we didn’t know is what the GT500 would look like in Ford’s Grabber Lime paint. And thanks to StangMode over on YouTube, we now know that it looks pretty good.

StangMode was invited to Ford’s proving grounds over at the M1 Concourse in Pontiac, Michigan to test drive a few of the new GT350s, but sitting in the parking lot was the aforementioned Lime GT500, and he couldn’t help but get a few close up shots.

First he does a walk around, giving us a great few of the carbon fiber rear wing, the massive hood vent with removable rain catch, the enormous Brembo brakes, and the carbon fiber wheels wrapped in Michelin Pilot Sport Cup 2 tires. These features note this particular GT500 as having the Carbon Fiber Track Pack which is designed to be the fastest Mustang to ever lap a track.

We also got to see under the Mustang’s hood, which for the first time is given a pneumatic piston instead of a simple prop rod. The two black circles you can see just next to the headlights are actually buttons that pop open the hood and allow the piston to deploy.

But besides the lovely piston, we’re also shown the GT500’s Eaton supercharger, the dedicated air intake, and the enormous new radiator that required the GT500 to use the 2018 Mustang’s headlights instead of the current model’s.

StangMode also let us know that pricing and availability will be announced this summer, so stay tuned.