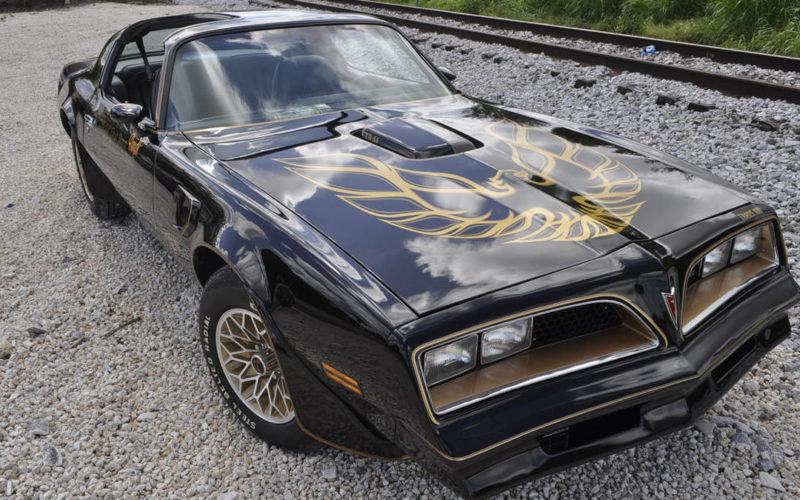 Forty years after its release, Smokey and the Bandit is still a spectacular fable of automotive fantasy. The portrayal of a smooth-talking southern trucker blasting across Dixieland on an escapade to deliver illegal booze is essential viewing for any connoisseur of car culture. The car, a 1977 Pontiac Trans Am LE, was such an integral part of the plot that the film’s director considered it a character.

It would be hard to fathom the Bandit behind the wheel of anything other than a black and gold Pontiac, but had it not been for a photograph in a brochure, the late Burt Reynolds may have been east bound and down in a Chevrolet Corvette or a Dodge Charger.

It was this Pontiac Trans Am LE — or more specifically, a photo of it — that convinced Reynolds and director Hal Needham that this would be a good buddy for Bandit. After seeing the car in the brochure, the Needham and Reynolds reached out to Pontiac and asked if they could have the car for the movie. Pontiac declined lending them that specific car, but instead built five other examples for them to use.

This brochure beauty’s backstory is a bizarre odyssey. It began life as a 1976 model that was assigned to GM’s west-coast press fleet. It was optioned with the 455 V8 and 4-speed manual, as well as T-tops (one of only 110 LE Trans Ams built in this configuration).

It enjoyed a typical press car life until Pontiac needed an LE Trans Am for a photo spread in the 1977 sales brochure. The company was in a pickle: production of the 1977 LE’s wasn’t scheduled to start for months, but they needed to get a photo of an LE in the brochure.

Pontiac executives decided that their best option was to go double or nothing and graft the 1977 nose onto this 1976 model. Pontiac sent a 1977 hood, bumper, headlights, wheels, decals and other trimmings to special projects engineer John Callies at the Van Nuys plant in California. Callies and his team got to work and, presto changeo, a “1977” Trans Am LE appeared.

According to the Pontiac historical society, the 1977 front end was removed following the photo shoot and the 1976 pieces were reinstalled. The car bounced around GM’s warehouses until early 1977, when it was sold to a California Pontiac dealer for around $7,400 ($31,895.39 adjusted for inflation).

Despite its provenance, the car wasn’t uncovered as the inspiration for the Bandit Trans Am until the after the new millennium.  At some point, the car made a trip across the country and landed at a dealer in Virginia, where it was purchased by a mother and son.

The pair had been searching for one of the original Trans Ams from the movie. After learning that none of the movie cars had survived filming, they decided to purchase this example. The rarity of the 455 V8, 4-speed, and T-tops appealed to them, as did the car’s original condition and 45,000-mile odometer reading.

The car was still sporting the “snowflake” 1977 LE wheels and other items, but they were clueless of the car’s history until they combed through the documentation from the PHS.

Realizing what they had bought, they contacted Rick Deiters of Trans Am Specialties in Miami to house the car and perform some restoration work, including a repaint and re-installation of a 1977 front-end.

After the restoration work was completed, the shop received a call from the Burt Reynolds Institute asking if they could display the car for a film festival in Key West. Reynolds saw the car at the festival and signed a 1977 brochure but did not know the significance of the car at the time.

After the festival, Reynolds had his agent reach out to the Deiters to inquire if there was any connection to the car and the photo in the brochure. Deiters confirmed that it was in fact the same car from the brochure. Reynolds ecstatic about the discovery and asked if the car could come to his estate in Jupiter, Florida.

Before passing away earlier this month, Reynolds made a video where he verified that this car was the inspiration for Bandit’s Trans Am. In case you’re wondering, the car is currently insured for $1.5 million and definitely won’t be jumping the Mulberry Bridge anytime soon.