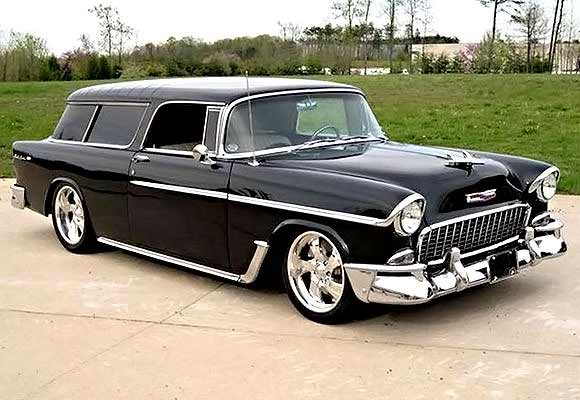 Viewing this black beauty could melt your senses and can cause the need to carry a drool towel for easy clean-up… Ok, that may be a bit extreme but this Hot Rod will attract attention…

You are looking at a super slick double nickel wagon that has been restored to perfection (twice) by the well known Midwest show car builder “Harry Willet” Coachworks of Chicago Illinois (www.willettspecials.com) Harry has won many top builder awards since the early 70’s including the prestigious “Americas Most Beautiful Roadster” Title at the 2009 LA Grand National Roadster Show…

Originally purchased/owned by a California family for over 40 years, upon passing of the original owner, the Nomad was transferred to his Illinois nephew during the mid 90s. The nephew chose to have this family jewel restored by Harry Willett Coachworks with a high end “resto-rod” format using the original chassis. The entire restoration was completed in 1999 and subsequently was trailered to many shows logging only 1,700 miles until 2007 when a divorce forced the nephew to sell her to the current owner…

The current so-cal owner wanted that perfect late model driver and appropriately chose the original builder Harry Willet to freshen up this beauty one more time. It was then shipped back to Willets Coachworks where it received a Art Morrison GT Chassis & Suspension along with fabricated 19 gallon fuel tank, custom Stainless Steel Exhaust & Headers, Rack-N_Pinion Power Steering, 4 Wheel Power Disc Brakes and much more. Basically, while the body was off the chassis Harry updated everything with the final tab this time exceeding $50,000 bones. Second restoration completed in May 2008 and about 4,100 miles of fun… your turn 🙂

In closing, if it has not already, this car in person will knock yer socks off and curl yer toes! What an exceptional car with great history. Study the photos and don’t’ miss this double nickel… Good Day!