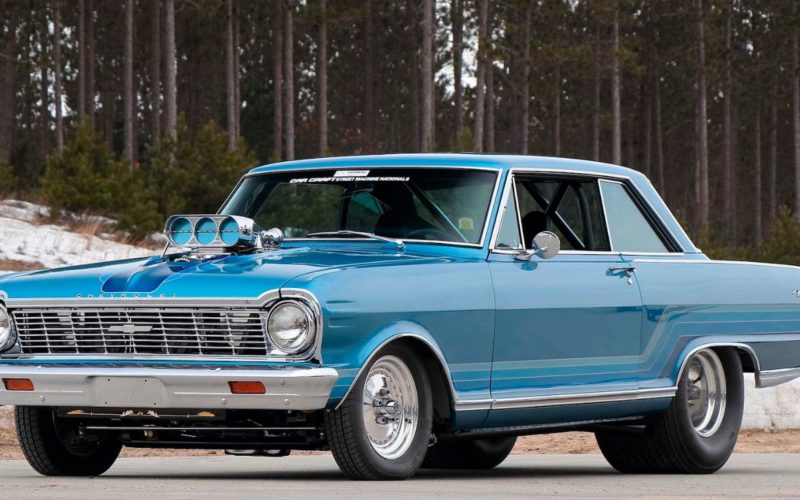 A featured cover car in the September 1982 issue of “Hot Rod” magazine, this one-of-a-kind 1965 Chevrolet Nova SS redefined excellence for the Pro Street genre. This machine garnered the coveted Grand Champion award at the 1982 Car Craft Nationals, a testament to its high standard of engineering and construction.

Although it is the product of a 36-year-old build, it remains cutting edge to this day with both forced-induction engineering and twin exhaust-driven Rotomaster turbochargers, an eight-port nitrous-oxide system, two Holley 750 CFM carburetors and a single mechanical-driven BDS 6-71 Supercharger. Mounted on a robust Chevrolet 454 CI V-8 big-block, the finely orchestrated induction hardware is beautifully plumbed and exemplifies the definition of a sanitary installation. Finished in a rich shade of metallic blue paint, this Nova certainly looks the part of a signature Pro Street car with its staggered wide-rear/narrow-front wheel and tire combination, rear wheelie-bar assembly with casters, twin rear parachutes and an exposed butterfly scoop protruding through the hood. The overall look is more than a little menacing, embellished with the wide-diameter rear Drag Slicks tightly fitted under the confines of the stock rear-fender arches—achieved through tubbing the rear inner wheel wells and shortening the rear axles. The interior adheres to the drag-racing persona with custom racing bucket seats, an incredible 17 Auto Meter gauges and topped off with a full roll cage. Designed, constructed and engineered by Rick Dobbertin, this Nova has been critically evaluated by the most knowledgeable and discriminating expert judges, who have awarded it with the Best Pro Street, Best Engineered, Best Engine and Best Car accolades for two consecutive years at the Car Craft Nationals. This is one mean Nova, an award-winning creation that played a pivotal role in advancing the evolution of the Pro Street machine.