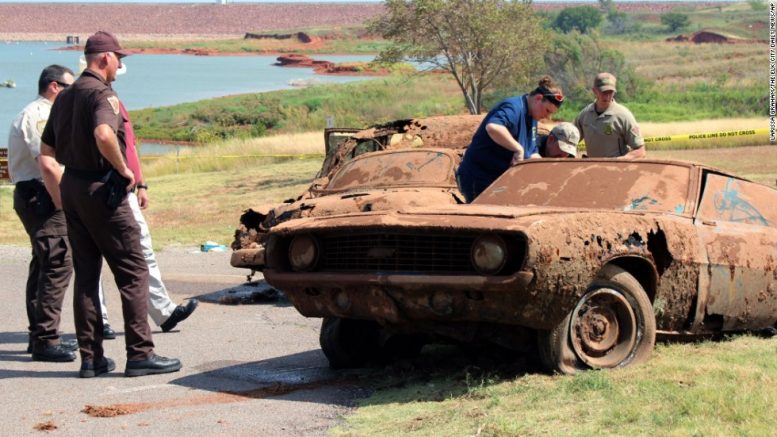 Six bodies were discovered in two cars found on the bottom of Lake Foss in Oklahoma. The cars, both at least 40 years old, were discovered when the Oklahoma Highway Patrol Marine Enforcement division were conducting training sessions involving new sonar technology.

Police pulled up a blue 1969 Camaro white top which matched the description of the car owned by Jimmy Williams, a 16-year-old last seen on November 20, 1970. Reports said he was heading to a football game with two friends, Thomas Rios and Leah Johnson, both 18, but their plans may have changed and they went for a hunting trip instead. No trace of the car, or any of their bodies, was found after that autumn evening. The three bodies in the Camaro are suspected to belong to the missing teenagers.

The second car recovered was a 1957 Chevy and it also contained the remains of three people. Police first suspected that the car belonged to a couple last seen in Canute, a town about 10 miles south of the lake, some time in the 1960s. It was later believed, however, that the Chevy was owned by Alvi Porter, a 69-year-old man that went missing in 1969. His granddaughter, Debbie McManamman, said in a television interview that she believed the car to be her grandfather’s green Chevy. It is not known who was in the car with him.

The highway patrol discovered the vehicles on September 10, then went back on a diving mission to investigate. The cars, which were found next to each other, were pulled out on Tuesday.

Internet users from the area have left comments on news sites speculating that the cars may have ended up in that part of the lake due to a particularly dangerous stretch of road near it.