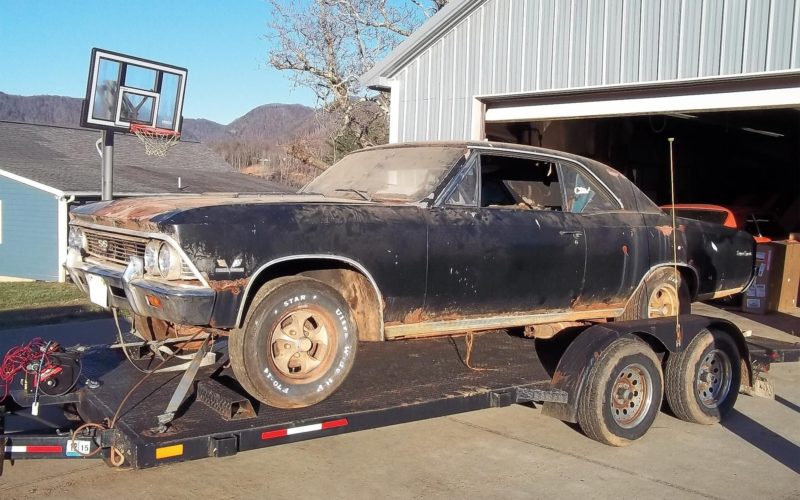 Allthough some might say that this historic automobile had its story mainly in a smaller area, this machine is worthy enough to be considered a racing historic machine, and it comes in a form of a unique ’66 Chevy Chevelle SS396. In the story, there are three different owners and all of them had a different idea of what this car is supposed to represent and do.
It all begins in the early seventies with a guy named David Heath, who loved muscle cars, and lucky for him his uncle that lived nearby in Stuart Virginia had a dealership called Stanley Chevrolet.
He bought a Chevelle SS396 at that dealership and to be honest, this was the finest piece of metal on that showroom floor If you ask him. He did not keep it in the driveway either, David enjoyed every second with his car often putting it through its paces on the mountain roads near Caudville Virginia where he lived.
During one of the many races that he enjoyed so much, he was up against a 1070 Mustang powered by a 428 Cobra Jet, during the race, David tried to get too much out of the 396 by over-revving it, and well you know what that means, a new motor hat to find its way under the hood of that Chevelle SS.

The decision was easy and a 427 was soon installed that was promising to take revenge on that Mustang soon.
Their favorite spot for racing was a part of the 103, called Claudville Highway, and instead of what is standard for racing nowadays, almost nobody ever stopped after the quarter mile marker, these racers would keep going for five miles along the curvy local roads.
It was nothing close to slamming the gas and holding on, no sir, these races took some real skill to make the turns in these huge and heavy machines.
David decided that he had enough of the adrenaline rush in 1980, and that year he parked his bellowed automobile in a shed, hoping that his son Mark one day will be able to bring that beauty to a perfect state.
Unfortunately, as we all know, providing for a family is always a priority instead of chasing a dream of a muscle car that needs restoration.
David never even thought about selling the car in all those years, and lucky for him one day a guy named Jonathan Large appeared at his doorstep, a man which even though is much younger than him, still remembers the races held at Claudville Highway.

Now these two start a new chapter in the life of that Chevelle SS396, a chapter that is supposed to bring the amazing machine back to its initial glory from years ago.
Their only “problem” is the decision weather they should put the original stock 396 or does this legend deserve something bigger?
What do you think?