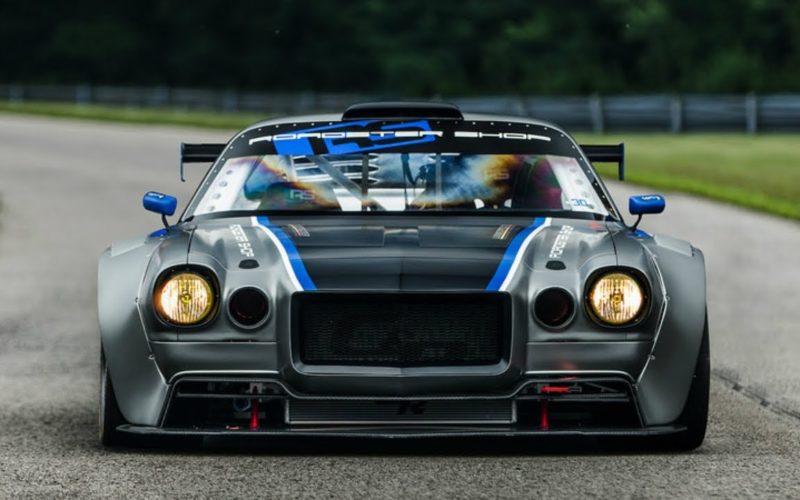 Restoration project of the 1970 Camaro SS that would be Rampage rolled into the Roadster Shop looking ratty—but intact—and remarkably straight. It had sat in the desert heat for years, the top half of the car orange from rust blooming through the sunbaked paint. Disassembly showed the floorpan was in a similar condition, with just a bit of rust. The floor could have been salvaged for a restoration, but that was not what was in store for Rampage. After returning from the mediablaster, steel tubing was used to reinforce the body, and the floorpan, inner rear wheeltubs, and trunk bulkhead were cut out.

The path that led to the Rampage Camaro began years ago when Roadster Shop co-founder Jeremy Gerber had an idea for a “wicked widebody” car. Jeremy selected a second-generation Camaro because it wasn’t quite as blasphemous to cut one up as opposed to a more-iconic 1969 Camaro or Mustang SportsRoof. Artist Chris Gray put the idea to paper, first as a line drawing, not much more than a sketch. It was everything Jeremy had envisioned. “I had a look, we just had to build it,” Jeremy told us. A repeat Roadster Shop customer caught a peek at the sketch and it inspired him as well. Chris soon had a full rendering completed, with aerodynamic upgrades and the proper stance. He was sold. It was time to get things moving.

Thomson Racing Engines supplied an LS7 that runs on pump gas and puts out an impressive 740 hp. The 427ci V8 was mounted 5 inches farther back in the chassis than normal and uses a Harrop individual throttle-body cross-ram intake manifold with twin custom-fabricated plenums that use ducting to pull cool air from the car’s leading edge. To cope with the tremendous cornering forces the wide Hoosiers are capable of, a Dailey billet dry-sump pump was tasked with oiling the bearings and valvetrain. Almost as important as Rampage’s performance was its sound. The shallow pan as well as the suspension design helped free up room to build a 180-degree header system that has a pair of primary tubes from each bank cross under the engine. The primary tubes meet at Burns stainless 4-into-1 collectors and were made to be as equal in length as possible for efficient scavenging.

Behind the LS7 is a Tilton bellhousing that mounts a five-speed Jerico road-race dogbox transmission at an angle for improved ground clearance. It’s yet another packaging trick and allows the exhaust to run underneath the transmission and driveshaft.

The car’s overall width is 81 inches, front and rear, as measured from the tires. The 18×12- and 19×12-inch wheels, front and rear, wear 345/35/ZR18 and 345/35ZR19 Hoosier R6 tires, respectively. A slightly less aggressive street tire is also an option, and that drops the width 1 inch per side for an overall width of 79 inches—still as wide as a fullsize truck.
As aggressive as it looks, Rampage still uses the same geometry as the Roadster Shop’s production Fast Track suspension, just with more track width. To compensate for the added width, custom control arms were built using 0.090-wall chrome-moly tubing, but their mounting points are the same as off-the-shelf Roadster Shop control arms. Technically, Rampage could be converted to stock Camaro width by removing its flares and swapping on new control arms and a more conservative wheel and tire package.